In 1998, 1 million ecstasy pills were smuggled into the USA by a group of Hasidic Jews.﻿ 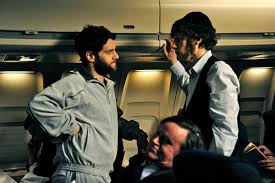 Sam Gold (Jesse Eisenberg) is a young Jewish man who wants to be a Rabbi and is about to be arranged in marriage. His edgy neighbor Yousef (Justin Bartha) eventually talks him into transporting "medicine" internationally. It doesn't take long for Sam to realize that medicine is actually ecstasy, and once he gets the hang of his new craft, he sees no point in stopping.

Eisenberg truly is the heart and soul of this film. Sam starts off a shy, vulnerable, maybe even slightly naive man who wants nothing more than to work for his father, be arranged in marriage and have children. He refers to these topics as if they are required. (Which perhaps, if he were becoming a Rabbi they would be?) Eisenberg slowly, but never fully brings Sam out of his shell. He could've gone nuts and turned into an addict, but everything he did was so subtle and so innocent. While we as the audience could've easily turned our backs on Sam's behaviors, we hang in there for him and hope that something good will happen.

This is apparently based on a true story, with the end credits explaining what happens to some of our leads. While the script underwhelms in parts, it's over-all interesting and well acted by Eisenberg and Bartha. Although I still haven't come to the conclusion on whether the accents in the film are authentic or slightly over the top.