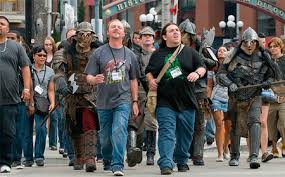 ﻿
You would think a movie written by Nick Frost and Simon Pegg, starring Seth Rogen, Kristen Wiig, Jason Bateman, and Bill Hader among others would be full of laughs, right?


Apparently not. Paul follows Graeme (Pegg) and Clive, (Frost) two life long friends from England that travel to the US to go to San Diego's Comic Con. After they decide to go on a tour of the "alien hot spots" they encounter a real alien outside of Area 51. He is Paul, (voiced by Rogen) He's been hanging around since the 1940's giving the government some insight on life outside of Earth. Now they are done with him and want to take out his brain to better understand how he can do things such as heel and pass is knowledge onto others by just touching them.  Paul hitches a ride with Graeme and Clive, who try to get him back to his mother ship.


I'm not saying Paul is completely laugh-free. There are a few funny parts in the film. With a cast like that I can't help but expect more. It's chuck full of pop culture references, but doesn't even hold a candle to all those things it's idolizes. When it attempts to be sweet, it ends up just being awkward. The entire film is fairly predictable.