DVD Review: I Saw The Devil

Getting bludgeoned in the head doesn't kill these people. 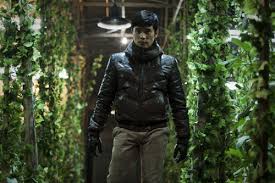 But Kyung-chul (Min-sik Choi) will finish the job. He's a ruthless serial killer. He preys on women of all ages. In fact, our film opens to a beautiful shot of snow falling on a highway. It turns ugly when we realize a women is stranded on the side of the road with a flat tire. She becomes the next victim. She also happens to be the pregnant fiancee of Kim Soo-hyeon, (Byung-hun Lee) a special agent that is now hell bent on vengeance. He's so blinded by his hatred that after he tracks Kyung-chul down, he doesn't actually kill him. Instead, he beats him to a bloody pulp and hunts him. When he begins to strike again, Kim Soo-hyeon shows up and unleashes more hell on him, but never kills him. The lines become blurred with who the bad guy is. The sadistic killer, or the man that's giving him a run for his money in the sadism department.
The story is very intriguing. The idea of a man tracking and beating another man to near death over and over to avenge his loved one isn't one we see often. Especially in this graphic detail. I personally could've done without all the nudity and rape (or near rape, depending on the version you are watching) but I understand why they were there. That's just a personal gripe of mine. It made me uncomfortable, which was the film's intentions. It's also very bloody, which makes it stand out a bit more from the revenge films we're used to seeing. I loved how the film made you question who was worse. Obviously you go in hating the killer, but when the supposed protagonist doesn't actually stop him from hurting people (he shows up about half way through) it's hard to pick a side completely. Sure the plot is a little far-fetched and the police officers in the movie come off as completely incompetent. It's an interesting thriller that doesn't cheat on the gore.
Recommended: Yes
Grade: B
Memorable Quote: "Your nightmare is only beginning." - Kim Soo-hyeon (Byung-hun Lee)
at June 28, 2011