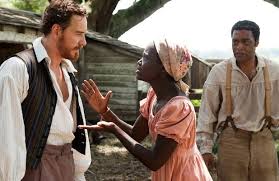 Paul Dano? Creepy racist power-trip. Benedict Cumberbatch? You're still part of the problem. Paul Giamatti? Fat jerk. Michael Fassbender? Crazy drunk asshole. Sarah Paulson? Bitch. Taran Killem? Wipe that smile off of your face. Don't worry, those are their characters I'm talking about. I had to get that off my chest.
Solomon Northup (Chiwetel Ejiofor) is a free man living in New York. One day, he's tricked by two circus acts, Brown and Hamilton (Taran Killem and Scoot McNairy) and is drugged and sold into slavery. No one believes he is free, and the more he protests, the worse he's beaten. Northup spends the longest amount of time under a cruel owner Edwin Epps, (Michael Fassbender) a man who grows even more sinister when he drinks.
Powerful. That's the best word to describe this movie. Sure, we know at the beginning that Solomon will eventually be free again, but it doesn't make seeing what happened to him any easier to watch. This film is practically a horror film. The things we see on screen are terrifying. (Even more so when you know this actually happened. A lot.)
Ejiofor owns this role. There are many times where director Steve McQueen has the camera focused only on Ejiofor's face, and that's all you need. It speaks volumes. Michael Fassbender and Lupita Nyong'o turn in spectacular supporting performances as well, though on different levels. Fassbender is cruel and horrifying, where as Nyong'o is tragic, yet strong. Her character endures so much, I would be shocked if she's left off the Oscar ballet this year. Michael Kenneth Williams shows up for a few minutes. Of course his first scene his character is gagged, because the man that plays Chalky White on Boardwalk Empire always speaks his mind. Then there was Adepero Oduye, who was tremendous in Pariah who made me shed my first set of tears during this film. Brad Pitt brings his Aldo Rayne accent back, and that's always a plus.
The ending was heartbreaking and perfect. They so could've gone the cheesy "running into everyone's arms while triumphant music plays in the back ground." way. But it was subtle and Solomon of all people apologizes to his family. APOLOGIZES. That's how good of a man he is, and that's what makes it even sadder. I literally couldn't even get up right away after the credits started rolling. I had to gather my composure because I was crying like a baby again.
I'm in awe with 12 Years A Slave, yet I don't know if I could actually sit through it and watch it again. It was a heavy, heavy film. One that needs to be scene at least once.
Recommended: Yes
Grade: A
Memorable Quote: "My bed is too holy for you to share." - Mistress Epps (Sarah Paulson)﻿