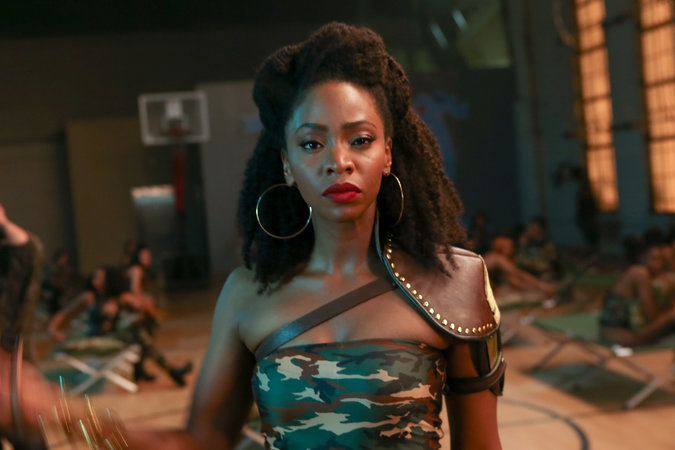 Chi-Raq is a play on Chicago and Iraq. Particularly the South side of Chicago with all its gang violence. The film is a modern retelling of the Greek play Lysistrata, and our Lysistrata (Teyonah Parris) is fed up with her boyfriend, a gangster actually going by the name Chi-Raq. (Nick Cannon) After witnessing a mother (Jennifer Hudson) weeping in the street over her 10 year old daughter being shot, Lysistrata decides to organize all the women together to hold back giving their men any action until the violence stops.

Where did this film come from? I didn't hear about it until a few weeks ago when bloggers began posting glowing reviews. After watching it myself, I'm shocked this film wasn't bigger, it has so much to offer. The film tackles serious social issues with a touch of humor and heart break. They speak as if they're in a play, with frequent rhymes and lengthy dialogue. Plus, how many other films are you going to see counter protests complete with crotch thrusts? None. See this one. It's completely fucking ridiculous at times, but it works.

Parris is an absolute dream. Every time she wasn't on screen I eagerly waited for her to get back. She's perfect for this role. Hudson, who I'm usually quite critical about was so strong here too. She had to do the bulk of the emotional scenes and she sold it. That couldn't be easy for her, as she's lost family members to gun violence in real life. Nick Cannon is always good for playing a douche, and Wesley Snipes, John Cusak, Angela Basset, Samuel L. Jackson, and Dave Chapelle round out the cast. Isiah Whitlock Jr. even shows up to udder his famous "SHHHIIIEEEEEEEET" line from The Wire.

If only solving violence was so simple as refusing to put out.