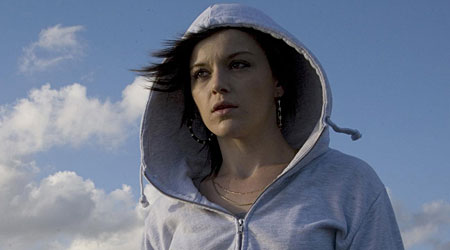 I first heard of 'Fish Tank' while reading Entertainment Weekly's website. Then it was nominated (and won) a BAFTA for Best British Film, so when it showed up on IFC On Demand (I love IFCOD..except for that time I bought 'Antichrist') I immediately wanted to see what this was all about.

Staring mostly British unknowns, the film follows 15 year old Mia (Katie Jarvis) a moody, unruly teen living in low income housing with her equally moody and unruly mother and little sister. She has a passion for dance, she sneaks into abandoned buildings to practice. When her mother gets a new boyfriend, Conner (Michael Flassbender) his obvious advances towards her are hard to ignore. Conner inspires her to go after her dancing dream, but he also brings out the worst of her. The film borderlines on whats right and wrong. At first you want something good for Mia, but we're quickly reminded that she is 15 and this man is dating her mother. It isn't healthy.

The way the film was shot was great. Lots of long shots, views of the poorer side of Essex. We definitely get to see the film through Mia's eyes, and share her point of view. The film tends to get a little random in places. A scene with Mia attempting to free a horse seem a little odd at first, but eventually came together in the end. I see a lot of potential in Katie Jarvis, who was apparently casted after the casting directer heard her get in a screaming match with her boyfriend at a train station. Little Rebecca Griffiths, who plays Mia's little sister Tyler was also a nice bit of comic relief.

Memorable Quote: "What does age matter if you like someone?" - Mia (Katie Jarvis) A perfect example of tainted youth.
at February 28, 2010