DVD Review: Gardens of the Night 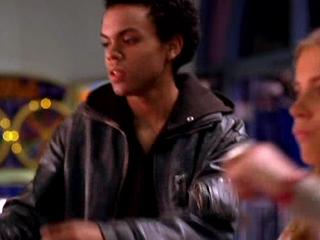 This film was hard to watch. I found myself squirming quite a bit through the first 40 minutes. Its an uncomfortable topic, but an important one. I hope to one day be a social worker, and to help children so that they don't have to endure this. That's why this movie struck a cord with me.

'Gardens of the Night' follows a little girl named Leslie (Ryan Simpkins) on her way to school one morning. She's approached by a man she's never met looking for his dog. Right away we know where this is going. She helps the man look around for his dog, and then he takes her to school. He tells Leslie he works for her father at the water company. After school they find her again and say her family has been in an accident and that they were told to get her. She reluctantly agrees to go. This starts the downward spiral in poor Leslie's life. The two men, Alex (Tom Arnold) the instigator and his helper Frank (Kevin Zegers) Take Leslie to a house where they have another little boy named Donnie (Jermaine Scooter Smith) held there. This begins the life of child prostitution these poor children are forced to endure. It's all being told in a flashback from a now 18 year old Leslie (Gillian Jacobs) as she and Donnie (Evan Ross) now make their way around the streets, still in a life of prostitution.

Director Damian Harris was smart about how he filmed this. There's never any abuse shown, only hinted. We know what is going on, but Harris actually have a separate script to his young actors so that they didn't have to fully understand what was going on. It reminded me a lot of how Gregg Araki shot 'Mysterious Skin'. He protected his child actors, as does Harris in this film. The children give very convincing performances. They're surrounded by all this horror yet they find solace in each other. Tom Arnold is especially creepy, and Zegers is as well. It's slightly hinted that Frank was at one point in the same position Donnie and Leslie are in now. There's plenty of other familiar faces in small roles, Jeremy Sisto as a pimp, John Malkovich as a psychiatrist that Leslie talks to at a shelter, and a blink and you'll miss it appearance by Michelle Rodriguez. Jacobs and Ross show potential in their performances, but do come off a little forced at times.

The film is shot in an interesting way, it really does capture the dirtiness of living on the streets, and the way things are scene from a child's point of view. What the film doesn't do greatly is tie up it's loose ends. We never find out how exactly these children got away. They separate, we never know if they meet again. Leslie, in a very touching scene is actually re-united with her parents, then decides she doesn't fit in and leaves again. It's frustrating, but probably accurate. I couldn't imagine losing a loved one, and then find them again 10 years later. The heartache families go through when someone goes missing must be intense. That part of it really isn't explained in the film. There's many plot holes, but the overall message is the same. These things do happen, and they need to be stopped. It ruins lives, not just of those affected but by people they meet. It's like a domino effect. We want a happy ending, but we won't get it. That's just life.

Recommended: Yes, just be aware that the movie does have it's flaws.

Memorable Quote: "Let's make a promise. "No matter what happens, we'll always stay together. If something happens and we're apart. We'll meet at a place" - Young Leslie (Ryan Simpkins)
at March 19, 2010