Most true horror fans are wary of PG-13 horror films 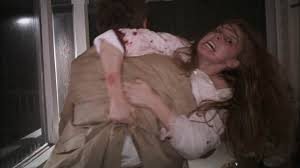 Luckily for us Gore Extraordinaire Eli Roth serves as a producer, and he wouldn't associate his name with something that isn't creepy.

The Last Exorcism is creepy alright, and the documentary style in which it was shot helps. We follow Cotton Marcus (Patrick Fabian) a priest who doesn't believe in demons and exorcisms. He's letting a film maker, Iris (Iris Bahr) film his last exorcism. He opens the first letter he receives and leads Iris and her extremely tolerant Camera Man to the Sweetzer farm to Exorcise young Nell. (Ashley Bell) They didn't expect what happens next.

Ashley Bell gives one hell of a performance, and her stare alone is responsible for most of the unsettling scenes in this film. It's all shot from a hand held camera. It feels raw and grainy, but it's not shaky and mostly stays in focus. I call the Camera Man tolerant because if I were him, I would've high-tailed it about 50 mins sooner than he did. The ending of the film is a big topic. It drew a lot of very loud laughs from my fellow movie goers. I actually thought it worked. It doesn't explain a whole lot, but it's enough for you to know that something just isn't right. It's sudden, but effective.