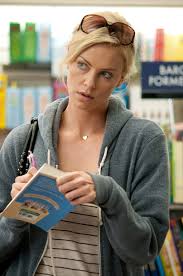 Mavis Gary (Charlize Theron) left her (fictional) hick town of Mercury, MN to move to the big city. In this case, that city is Minneapolis. Her job is a ghost writer for a once popular young adult series. When she gets an email letting her know that her old high school flame, Buddy (Patrick Wilson) has just welcomed a child. Mavis, recently divorced, decides that she's going to go "save" buddy from what she thinks is an unhappy marriage that traps him in the small down. She runs into fellow classmate, Matt, (Patton Oswald) whom she never gave the time of day before, and drunkenly tells him her master plan. He attempts to knock some sense into her.
Young Adult is Jason Reitman and Diablo Cody's 2nd collaboration, and you have to give them credit for being gutsy enough to center their film around a completely unlikable character. Diablo Cody's signature dialogue is thankfully toned down and Theron and Oswald thrive off of their off beat chemistry. What I didn't like about the film was there was no redemption. I suppose that sets it apart from most films where the main character gets a serious reality check, but not having that happy ending hurt it in my opinion. Sure, Mavis realizes she needs to get the hell away from her small town, and as a small town girl, I can relate, but she never stopped being a heinous bitch. Her one redeeming moment at the end of the film is ruined by the fact that she still doesn't care about other people and that soured the movie for me. I just wanted her to apologize, and she never does.

Young Adult isn't a bad film, but it's certainly Reitman's worse. Even though I didn't like the final note, I can't say that I hated watching it. One minor gripe from a Minnesotan - NO one refers to Minneapolis as just "the city." It's always "The Cities" because of Minneapolis and St. Paul. Minor gripe that I'm surprised wasn't addressed when making it.