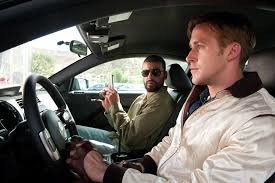 The opening credits of Drive don't do the film justice in my opinion. Upon first look I felt like I might be getting into a crappy 80's movie. (even though I knew that wasn't the case) Drive surprised me in many ways. I expected and received great performances from Gosling, Mulligan, and Cranston, but I wasn't expecting the film to be so wonderfully over the top.

The Driver (Ryan Gosling) is a stunt car driver/mechanic by day and get away driver by night. He meets his new neighbor Irene (Carey Mulligan) and immediately grows protective of her and her young son. When her husband gets out of prison and finds himself and his family threatened, The Driver offers to help. Things began to spiral out of control.

When I say the film was over the top, I don't see it as a bad thing. I wasn't expecting the Cronenberg-style violence, but it was a nice surprise. It made the film more shocking and intense. The plot itself seems very unrealistic, but that's how it was supposed to be viewed. It's a constant thrill ride.