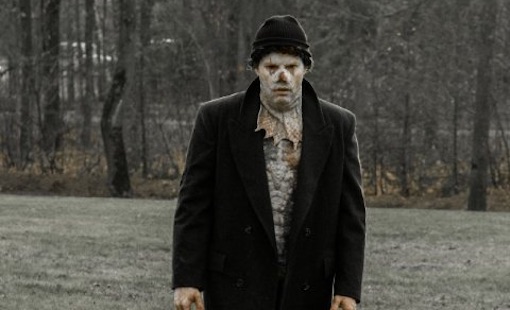 It's Jack's (Christian Distefano) birthday and this kid for some inexplicable reason loves clowns. I didn't know such children existed but here we are, and the clown that is supposed to come to Jack's party is double booked. His mother, Meg (Laura Allen) calls her realtor husband, Kent (Andy Powers) who's closing an open house to tell him a bad news. Lucky for him, the house he's in happens to have a bunch of costumes lying around, and one of them is a clown. He puts it on for Jack, but after the party he finds that he can't take the costume off, and it's starting to possess him.

You have to except that the premise for this movie is kind of stupid (I kicked my husband out of the room after about five minutes for making fun of me) But that's what makes horror movies fun! And fun this is. Kent while possessed by a demon clown literally goes around looking for children to eat. He even ends up in a Chuck E Cheese at one point, which I like to think is a metaphor for how parents really view that place. A literal fucking nightmare.

I wasn't familiar with Powers before this. Allen, I knew from a wonderful little indie called Cherry and they're both great here. The child actors are all awful, but a few of them get eaten so it evens out.

Memorable Quote: "Jack, do you know where the bolt cutter is?" - Kent (Andy Powers)