Showing posts from December, 2009
Show all

- December 28, 2009
How excited are you for this? Christopher Nolan, Leonardo DiCaprio, Joseph Gordon-Levitt, Ellen Page!
Post a Comment
Read more

Mysterious skin was a hard film to make, a hard book to adapt, and a hard role for any actor to take on. When director Gregg Araki started on this film he knew he was going to have to film this very carefully, as the subject matter could be easily exploited. He cast the perfect leading man (Joseph Gordon-Levitt) who was fearless in this role. The way the film was shot was so careful, yet so clever. The film ended up with a harsh (and questionable) NC17 rating for subject matter, rather than the content itself. The film follows two different boys, growing up in the same small town in Kansas. Though they only met once as boys on their little league team, it's their past that binds them. It's a total character study of how two people can react differently to such a drastic situation. Neil (Joseph Gordon Levitt) grows up to be a hustler, cocky and independent and without a care in the world. Brian (Brady Corbet) grows up a shy, fidgety young man who believes he was abducted by a
Post a Comment
Read more

When you think of director James Cameron, the words "epic" "expensive" and "effects" (special, that is) come to mind. This is the man that brought us 'Titanic'. The highest grossing movie of all time. He obviously knows he has a wide audience, so naturally his latest film, 'Avatar' plays to a number of different people. This 3D spectacle is visually stunning, however it's length (3 hours) and it's minimal story hurt it more than help it. 'Avatar' is about Jake Sully (Sam Worthington. Terminator: Salvation, Sommersault) he's a paraplegic marine that takes a mission to the far away planet of Pandora. Earth is suffering an energy crisis, and they want whats underneath the people of Pandora, the Na'vi's home to solve it. Jake wasn't originally supposed to go, his twin brother was. In the wake of his death, Jake is sent because his DNA matches that of his brother, so be will be able to operate his "avatar
Post a Comment
Read more

My 10 favorite films of the decade. 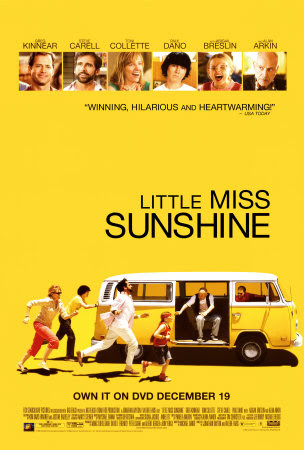 I always do my 10 favorite films of the year, but seeing as we're enter a new decade of I'm sure memorable movies. I figured I would try to see if I can narrow down my long list of flick that I love in a top ten list. This also made me realize that 1999 was a good year for movies, When I would think of a movie I wanted to include, it would dawn on me that it came out in 1999. 10) Little Miss Sunshine This lovely little roadtrip film about a dysfunctional family taking their precious daughter to compete in a beauty pageant pulled on everyone's heart strings, and became the quirky indie that could. It was nominated for Best Picture at the Academy Awards. 9) Eternal Sunshine of the Spotless Mind Another film that was a whole lot of quirky. This film was about a couple that undergo a treatment to erase their memories of each other, only to find out exactly what they had. It's got an all star cast (Jim Carrey, Kate Winslet, Kirsten Dunst, Elijah Wood) and they are
3 comments
Read more

- December 15, 2009
The "FTW" edition. I'm going to go over each category with my opinions and who I think will win each category, and who deserves to win (sometimes they are not the same person. Best Motion Picture - Drama Nominees:Avatar, Precious, The Hurt Locker, Inglorious Basterds, Up in the air The only one that surprised me was "Avatar" I really thought 'The Lovely Bones' would be in there. I'm happy to see Inglrious Basterds as that movie was awesome, and I'm excited to see 'Precious'. I'm going with 'Precious' FTW. Best Motion Picture - Musical or Comedy Nominees:(500) Days of Summer, The Hangover, Nine, Julie and Julia, It's Complicated (500) Days of Summer has been one of the best movies I've seen all year, I'm glad it's getting love outside the indie circut, and how awesome is 'The Hangover' being nominated? You have to admit that when you first saw the previews for that, you thought it would be "
Post a Comment
Read more

- December 13, 2009
A lot of sports movies borderline with being inspirational or campy and over the top. 'Invictus' is a breath of fresh air, the acting is to notch, it focuses on an interesting sport (rugby) and not something overdone like football. 'Invictus' (meaning invincible) is based on the true story of Nelson Mandela (Morgan Freeman), a man elected to be the president of South Africa while the country is on the verge of civil war. He takes a unique approach with his new power and tries to help the country's Springbok rugby team (led by Matt Damon as Francios Pienaar) to win the world cup. His hope is that uniting the mostly white rugby team with everyone else in the country, no matter the color will bring them all together. Morgan Freeman (Mandela) is a tremendous actor. He's so good that I actually find myself getting legitimately annoyed when people are mean to him on screen. He embodies Mandela and instantly makes you believe in him. Watching Freeman in that role m
Post a Comment
Read more

- December 08, 2009
This movie made waves back in 2003 when it released. The low budget film saw it's stars Evan Rachel Wood and Nikki Reed break out, and earned supporting actress Holly Hunter an Oscar nomination. "Thirteen" follows Tracey (Wood) a typical goody two shoes thirteen year old. On her first day of junior high she sees another girl her age, Evie (Reed) and she's everything Tracey wishes she could be. Gorgeous, has cool clothes, attitude, and most of all, every guy's attention. Tracey takes some series steps to get into Evie's circle and eventually becomes her best friend. We slowly watch Tracey as she falls through a downward spiral of drinking, drunks, sex, etc. "Normal adolescence behavior" so to speak. The script was written by both Reed and director Catherine Hardwicke. It was loosely based of events that had happened in Nikki's life. That's what made it all feel so real. I could see myself at thirteen doing some of the same things (though n
Post a Comment
Read more

Out of Competition Sundance Lineup

- December 02, 2009
Sundance Film Festival organizers have announced their 2010 competition line up in the US and World Narrative and Documentary Features catagories. The movies offer quite a range of material, and it should make for a very interesting festival. State Of Independence will be covering Sundance, as well as Slamdance, in January here on the site, on the State of Independence podcast, and also on Subject:CINEMA's Fourth Annual Fethival Of Film Fethivals, and the PNR Blogs will do our best to keep up with all the news for you. In the meantime, here's the list of films announced today: U.S. DRAMATIC COMPETITION Blue Valentine (Director: Derek Cianfrance; screenwriters: Derek Cianfrance, Cami Delavigne, Joey Curtis). A portrait of an American marriage over time. Cast: Ryan Gosling, Michelle Williams, Mike Vogel, John Doman. Douchebag (Director: Drake Doremus; screenwriters: Lindsay Stidham, Drake Doremus, Jonathan Schwartz, Andrew Dickler). On the verge of getting married, Sam insis
Post a Comment
Read more