Showing posts from February, 2014
Show all

Is it necessary for Charlie to die? I couldn't help but reference the film's original title. They should've kept it. Charlie's (Shia LaBeouf) mother (Melissa Leo) has just passed away. Charlie feels lost and has a vision of his mother after she dies. She tells him to go to Bucharest, Romania. He does just that, when a man he's sitting next to on the plane dies, he has another vision to meet the man's daughter. He also does just that, he meets Gabi (Evan Rachel Wood) a beautiful and now heartbroken cello player. He's drawn to her immediately, but her ex husband Nigel (Mads Mikkelsen) is still in the picture and he is a dangerous man. The thing that sticks out the most in this film is the music, it's absolutely beautiful. It fits with the fast scenes and free spirits that Charlie and Gabi so obviously have. It can be brutal at times, but it never feels over the top. The cast is great. Rupert Grint has a small role as an aspiring porn star Ch
9 comments
Read more

Final 2014 Oscar predictions: Who will win, who should win.

Alright, alright, alright. Let's get this guessing game going! Best Picture "American Hustle" "Captain Phillips" "Dallas Buyers Club" "Gravity" "Her" "Nebraska" "Philomena" "12 Years A Slave" "The Wolf of Wall Street" Who will win and should win: 12 Years A Slave. Sure, I technically liked Her, Wolf, and Hustle better than 12 years, but I can appreciate a well made film with an all around incredible cast that brought a lot to the table. I see it winning here. Best Actor in a Leading Role Christian Bale, "American Hustle" Bruce Dern, "Nebraska" Leonardo DiCaprio, "The Wolf of Wall Street" Chiwetel Ejiofor, "12 Years A Slave" Matthew McConaughey, "Dallas Buyers Club" Who will win: Matthew McConaughey Who should win: Leonardo DiCaprio I'm not going to be mad when Matthew wins, but I really think Leo deserves this one. It's ea
10 comments
Read more

M. Brown over at Two Dollar Cinema is hosting his first ever blogathon . Since I'm constantly laughing at everything M posts over on his site, I felt it would only be right if I chose my Mt. Rushmore of movies (and tv) as something that amuses me.  Behold: The Mount Rushmore of Awful Cry Faces   (If you're on this site looking for good graphics, I suggest you get your ass over to Cinematic Corner . Ain't nobody got talent for that here at Rambling Film.) James Van Der Beek James Van Der Beek probably has the most popular cry face in the world. How many have you have seen this gif without actually watching Dawson's Creek? Norman Reedus Sometimes I wonder if The Walking Dead's main purpose on TV is for the internet to create memes out of it. Lo and behold Norman Reedus' awful cry face. This thing shows up on every Walking Dead site out there and NO ONE thinks it looks good. Claire Danes I could honestly put together
25 comments
Read more

Motifs in 2013 Cinema: Reality vs Fantasy 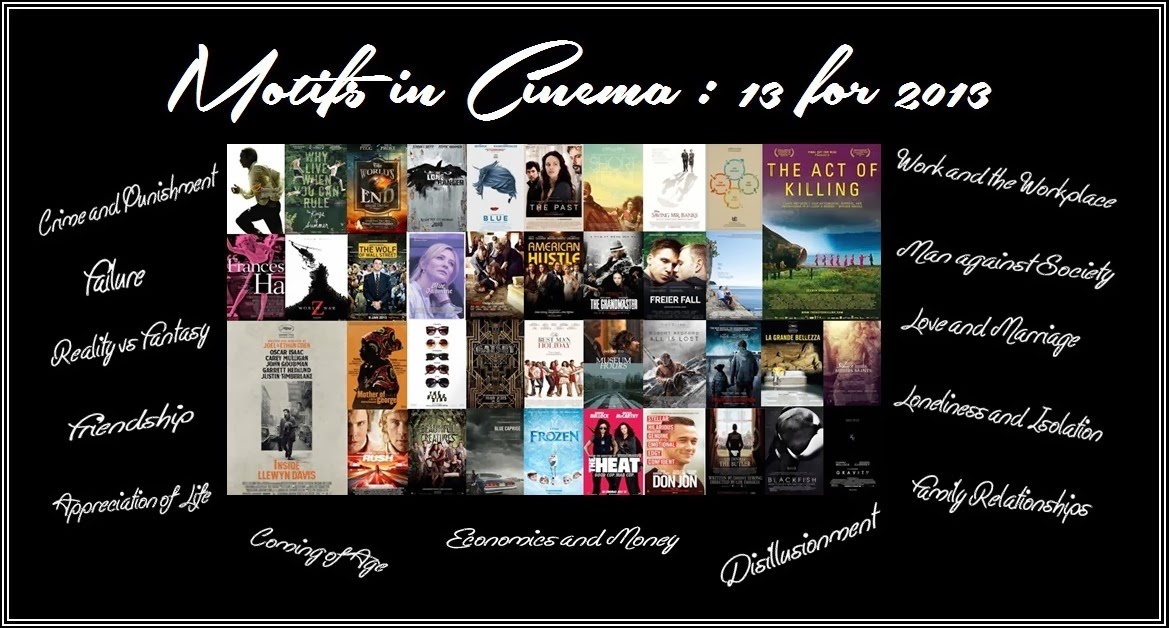 Andrew over at Encore's World of Film and TV is bringing back his popular blogathon Motifs in Cinema  He's chosen 13 motifs and ask that we pick one and use at least 4 films. I picked Reality vs Fantasy. Last year I chose Appreciation of Life . Thanks for hosting this again, Andrew! I hope this isn't too much of a jumbled mess. Motifs in Cine ma is a discourse across film blogs, assessing the way in which various thematic elements have been used in the 2013 cinematic landscape.  How does a common theme vary in use from a comedy or drama? Are filmmakers work from a similar canvas when they asses the issue of death or the dynamic of revenge?  Like most things, a film begins with an idea - Motifs in Cinema accesses how various themes emanating from a single idea change when utilized by varying artists.  1) Her  Falling in love with someone that isn't "real" I don't think there was a film that captured 'realty vs fantasy' in 2013 bett
10 comments
Read more

It was middle finger night on The Walking Dead/True Detective last night. The Walking Dead - episode 4.11: Claimed Still in the annoying bottle format, this episode focuses on two groups. Rick's and Glenn's. Let's start with the latter. We see the newly introduced Abraham, Rosita, and Eugene driving off in their truck with Tara and a passed out Glenn in the back. Tara is doing one of the smartest things I've seen someone do on this show in a long time, and is writing down the directions from where they came. Note the big "BUS" on her hand.  Glenn finally wakes up and demands that they stop the truck so he can leave and search for Maggie. Abe drops that bomb that Eugene knows what started the apocalypse and they are on their way to Washington D.C to fix it. Glenn doesn't care, he just wants his wife. Abe tries to tell Glenn that she's probably dead, which Glenn responds to by punching Abe in the face. (I love Glenn) Abraham
14 comments
Read more

Indie Gems: Sound of My Voice

You will not get this movie out of your head. Peter (Christopher Denham) and his girlfriend Lorna (Nicole Vicius) are trying to make an undercover documentary on a suspicious cult who's leader,Maggie (Brit Marling) claims to be from the future.  Brit Marling's films have a bit of a trend, their endings are often left open for us to decide what happens next. This film is no exception. We're given hints here and there, but ever full on answers. In a way, it drives me crazy, because just when I think I have a solid theory on what Maggie is really all about, something else throws a wrench in it. But that frustration is what makes this film SO intriguing. I can't stop thinking about it days later.  Christopher Denham is a fascinating actor. He's someone who I hope to see in more films, he's absolutely captivating here. Especially in his scenes with Marling. I know i called this film frustrating, but I mean that in the best way possible. I can't rec
6 comments
Read more

Adult children of divorce. Carter (Adam Scott) has been caught up between his parent's (Richard Jenkins and Catherine O'Hara) rough relationship and subsequent divorce all his life. He finally found a middle ground as an adult. When his little brother's engagement happens, Carter has to find a way for them to be civil in the same room, he then learns he was actually a part of a study of the effects divorce has on children by Dr. Judith (Jane Lynch) and that really makes everything worse. The premise of this was interesting. Technically, I'm an A.C.O.D. I joke about my parent's divorce being (and at times, still) a gigantic pain in the ass, but they are happy and it's all in good fun. I expected this film to feel a little similar, but how does a film with Scott, Jenkins, Lynch, and Amy Poehler end up so drastically unfunny? 'Average' is how I would describe this film. There's nothing special about it. The talent of its cast is wasted, t
8 comments
Read more

I'm still abusing Online Image Editor The Walking Dead - episode 4.10: Inmates Well, the powers that be said we would "get inside Beth's head" this season and that's exactly how we started out this episode; with Beth narrating an entry in her diary. It was from when they first arrived at the prison, and how she looked forward to making it a home. As her and Daryl dramatically fell in the middle of a field, she says "we can live here for the rest of our lives." Scene cuts to Beth and Daryl around a fire, and her telling Daryl they should do something, that they can't be the only survivors. I guess these people never thought of a rendezvous point in case they got split up, which I find incredibly stupid considering they had an exit strategy. How do you not think these things through? Anyways, they start to track, they come upon some dead bunnies in a log, blood on some plants, and some dead walkers that were apparently feasting on huma
8 comments
Read more

What if. Rhoda (Brit Marling) had everything going for her. She just got accepted into MIT, and she's fascinated with outer space. One night, it is discovered that there is actually another Earth, while listening to a radio broadcast and staring into the sky, Rhoda causes a car accident that will change her life forever. I first came across Brit Marling in The East, and I've been sold on her ever since. I've had this film and 'Sound of my Voice' in my Netflix queue for awhile, and I was happy to get this. The thing I liked most about this film was the discussions it provokes. Especially when we learn more about Earth 2. (I don't want to spoil it in the review, but feel free to talk about it in the comments) Sure, a lot of people are annoyed by the "logic" behind this other Earth, and how close it is to Earth in the film. Honestly, it doesn't matter. It could almost be irrelevant in a way. This story is about Rhoda and her relationshi
13 comments
Read more
More posts