Showing posts from April, 2018
Show all

It all leads up to this. Thanos (Josh Brolin) has been watching from afar and is now ready to make his move attacking Earth. After the events of Civil War, the Avengers are fractured and now must band together once again to fight for all humanity. To say I was hyped for this movie is an understatement. I love the MCU (most of the time) and what they bring to the table. Ten years of films have been leading up to the war against Thanos and here we are. I kept my expectations in check, there's a lot of people in this film and I always knew there was a chance it could be over stuffed. So how did it do? Incredible. The thing I worried most about a film of this magnitude was that it would be overstuffed, but it never felt that way. Even characters who only had a scene or two felt like a big deal because they made it into Infinity War in the first place. The pacing was perfect. This didn't feel like a two and a half hour movie at all. The best part as always is the che
18 comments
Read more

It's another TV week over at Wandering Through the Shelves . This week we're talking about TV shows that were not long for this world. Those one season wonders, those shows who could've went on to do something big, but crashed and burned.  1) The Fades This was a cool horror show that starred some of my favorite up and coming British actors and it only lasted six episodes. It ended on a cliffhanger too. Pretty much everyone in it found success on other shows/films but I wish they would've went at least another season 2) Freaks and Geeks I didn't watch this until well after it was on the air but I wish I had seen it earlier. It was so funny and I wish we could've seen where they would've gone.  3) My So Called Life I was a little young to get all of this but I watched it with my sister and it reminded me of her since she was in high school at the time. I was sad when it ended.
20 comments
Read more 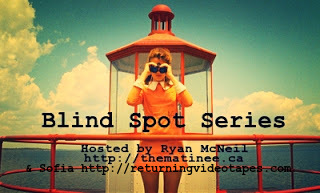 What I knew going in: I had seen some of the musical numbers A silent film star, Don Lockwood (Gene Kelly) finds himself having to get with the changing times when the first "talkie" film is a big hit. A chance meeting with a young up and coming actress, Kathy Selden (Debbie Reynolds) blooms into a secret romance when she is talked into dubbing over Don's frequent costar, Lina (Jean Hagen) in their newest films. I decided I wanted to think of something other than A Clockwork Orange when I hear the song "Singin' in the Rain." As much as I love tap dancing, I'm awful at watching these classics all the way through instead of just looking up specific routines. This film is absolutely delightful. The fact that Debbie Reynolds didn't have any dance experience before she made this is extraordinary. Gene Kelly is always a reliable leading man and Donald O'Connor is a joy to watch. The funny thing is this film makes me hate The Artist even mor
21 comments
Read more

We've all had them, right? Maybe not as dramatic or messy as some. Or maybe our children have had them, and we have to handle it while trying not to die of embarrassment. Or perhaps someone has wire hangers in their closet. But Wanderer wants us to talk about meltdowns this week. Here are some of my favorite films where the characters are just done. 1) Hello I Must Be Going Amy (Melanie Lynskey) is going through a divorce, has moved back in with her parents, then starts to have an affair with a guy a lot younger than herself. When everything gets heavy, she has one of my all time favorite moments in film where she falls over and says "where the fuck is bottom?"  2) Black Swan  This might be the most controlled and beautiful meltdown of all time but Nina is essentially losing her shit during her performance. *puts Black Swan DVD in* 3) Anchorman: The Legend of Ron Burgandy HE'S IN A GLASS CASE OF EMOTION!
22 comments
Read more

I want you to live. Members of the French advocacy group ACT UP Paris are struggling with getting their leaders to acknowledge the AIDS crisis in 1990. Our main view point is a young HIV positive man, Sean (Nahuel Pérez Biscayart) who finds a new relationship with Nathan (Arnaud Valois) a new recruit. This is yet another movie that gets the AIDS crisis better than Philadelphia does. I know it's a weird way to start a review but I keep thinking back to my February Blind Spot and I still can't believe how the Academy embraced something that played it so safe. The extraordinary thing about BPM is that a number of the scenes take place in a classroom where the group meets. They just debate and talk out their issues, and it's fascinating. A film that relies so heavily on scenes like that already has an up hill battle with keeping everyone's attention and this film tackles it perfectly. I could've sat it on these meetings all day.  Biscayart and Valois ha
10 comments
Read more

This week's theme from Wandering Through the Shelves is something we all doubly love, right? MOVIES about MOVIES! There's actually some great films in this little sub-genre, one of them was a favorite of mine last year.  Here's what I came up with. The only rule I gave myself was that I couldn't re-use the three I chose when we had this topic back in 2014, and those were Tropic Thunder, Bowfinger, and Boogie Nights. 1) The Disaster Artist The hilarious detailing of the making of the notoriously bad movie The Room. I loved this to much. Never betray me.  2) Scream 3 I love the Scream trilogy, and the subplot in this one involved members of the "Stab" movie within a movie being offed as well. 3) Me, Earl And The Dying Girl The teenagers in this film try to make a movie for their dying friend. The result was of course me crying like a baby.
26 comments
Read more

Shhhhh A family of five, Lee, (John Krasinski) Evelyn (Emily Blunt) and their three children Regan, Marcus, and Beau (Millicent Simmonds, Cade Jupe, and Noah Woodward) live on a farm in complete silence. The world is now inhabited by creatures that hunt by sound. They have a bit of an advantage. Their daughter Regan is deaf meaning the entire family already knows sign language but day to day life is still a struggle. Especially now that Evelyn is pregnant.  After seeing the first teaser trailer, I knew immediately that I wanted to see this and that I wanted to know as little as possible going in. I honestly would not have even chose to watch the second trailer released if it hadn't been attached to some movies I'd seen. That paid off, not because the movie itself is so unpredictable, but it helps put you in the atmosphere. Calling this movie tense is an understatement. It's almost completely silent. There's maybe 10-15 lines of spoken dialogue in this ent
19 comments
Read more

Indie Gems: To The Bone

Calorie Asperger's Ellen (Lily Collins) is a young artist struggling with anorexia. Not only is she killing herself, she's killing her relationship with her family. A last ditch effort by her step mother, Susan. (Carrie Preston) sends her to live in a group home run by Dr. Beckham (Keanu Reeves) This film got a lot of flak for the way it portrays eating disorders when it first came out. Like any time a mental illness is shown in film, there's the realism vs exploitation debate. I actually appreciated the care they took in showing all of this. Eating disorders on screen for me are shitty Lifetime movies where the bulimic girl for some reason hides jars of vomit in her closet. (because that's logical) No such foolishness goes on in To The Bone. The few "tricks" they show the girls doing to avoid food are not out there and they do not for one second shy away from how devastating these illnesses are. Collins is really proving herself to be a capable
12 comments
Read more

This week's Theme from Wandering Through The Shelves is movies that take place underground. Unless I'm taking this too literally and we're supposed to be talking about "underground" in the sense that the films started with small viewings? I'm going to go with actually underground. Be nice to me if I'm wrong. I have anxiety.  1) Buried This film is literally just Ryan Reynolds in a box underground. The premise is terrifying. It's probably the best performance he's ever given aside from Deadpool. 2) The Midnight Meat Train This is a fun horror movie. While it's not set completely underground, that's where all the gory magic happens. 3) City of Ember This completely flopped at the box office but I didn't think it was bad. It's not outstanding but it was a decent family film. Saoirse Ronan is great in it, as always.
16 comments
Read more

I've actually been watching quite a few movies lately, I just haven't felt very compelled to write full reviews on the ones I didn't love. The ones I did, I'll eventually post as Indie Gems. Here are some of the other films I've been watching over the past couple of weeks. Holy Hell - Rating: C- This is a documentary about a man who left a cult. Normally that is right up my alley, and this one is different because he has a lot of footage of his time during said events, but it just wasn't as fascinating and cohesive as it could've been.  Woodshock - Rating: F I love Kirsten Dunst, and that's why I chose this film. Within the first two minutes or so, my husband goes "I really hope this isn't a movie where she just walks around and stairs at trees the entire time." ...............It was. I didn't finish this, even though I only had probably 20 more minutes of it left. It was bad.  Loving Vincent - Rating: B- This film is clev
10 comments
Read more
More posts