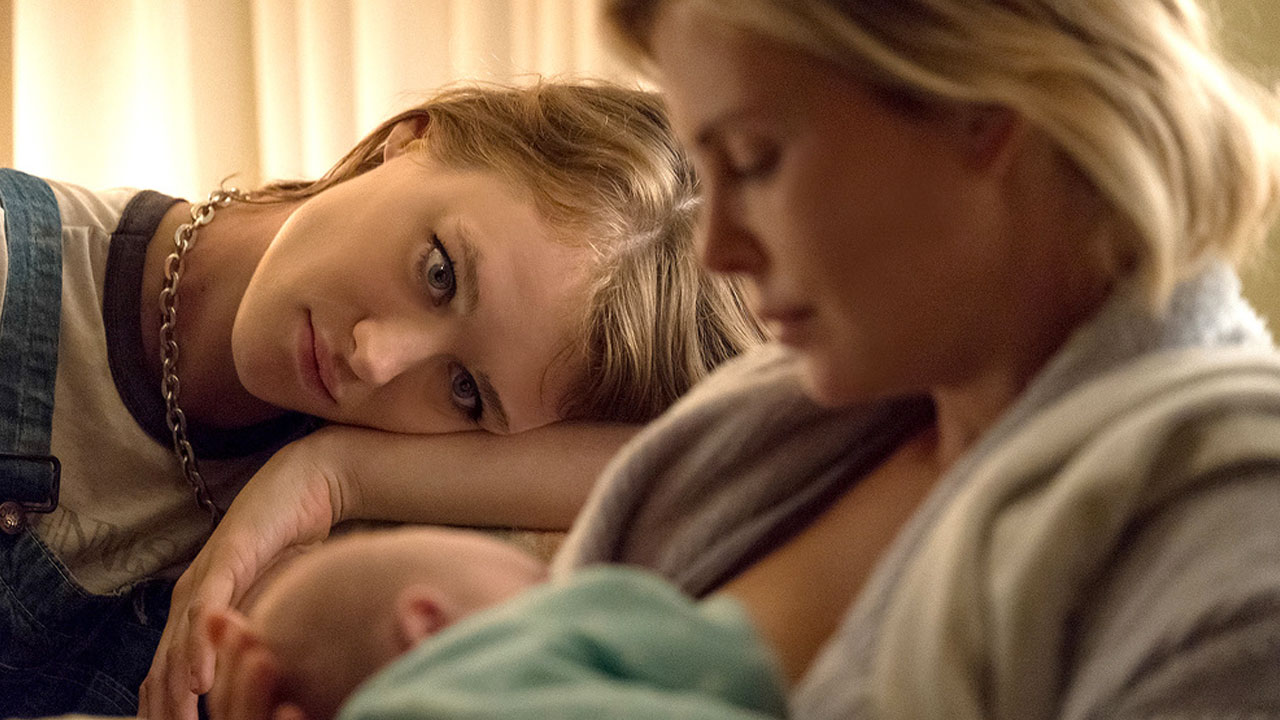 Surprise! I actually saw something new instead of going to see Infinity War again.

Marlo (Charlize Theron) is about to have her third child. It wasn't planned, she already has her hands full with two other children, one with special needs and her husband Drew (Ron Livingston) is utterly useless. Her rich brother, Craig (Mark Duplass) gifts her a night nanny in the form of Tully (Mackenzie Davis) who is there to make Marlo's life easier.

There's been a lot of think pieces written about this film, which I will address after I give my rating because I can't do so without spoilers. The review itself is spoiler free.

Jason Reitman and Diablo Cody make a good team. Bringing back Theron after working with her in Young Adult was a great move on their part as well. Unlike her character in that film, I found Marlo to be believable and I understood her struggle. Marlo needs Tully because she has no support system anywhere.

Theron is excellent and really dedicated herself to this role. Davis is a breath of fresh air herself. Sometimes with Cody's scripts, I find that I can't imagine real people talking the way she writes them, but I didn't have that problem here. There are a few things I don't think this film handles particularly well, and I'll get into that in the spoiler talk, but it's a very honestly portrayal of the harsh realities of postpartum mental illness and those who can't afford to treat it. I'm glad this film brings that conversation to light.

SPOILER TALK
.
.
.
.
.
You may have saw me complaining about this briefly on Twitter, but the backlash surrounding this movie by those who haven't even seen it is kind of outrageous and reminds me of similar complaints about a film that came out a few years ago, Obvious Child. See, Tully comes with a twist ending, and that twist involves Margo suffering from postpartum psychosis. The only problem is no one actually calls it that in the film. Drew tells a nurse she once suffered from "some depression" and it's left at that. Do I think that aspect is poorly handled? A little. I think a scene of the nurse actually explaining her condition to Drew would've been helpful, but do I think that ruins the movie and what it was trying to say? No way. It's not even the most poorly handled part of it.

That part is when Marlo and Tully have a conversation about how she and Drew no longer have sex. It's written very carefully to show that both parties are interested and it's Margo's insecurities that lead to her not wanting it at the end of the night, but Tully's response is essentially "You need light that fire" or something of the sort, and I find it extremely uncomfortable when someone has to be talked into sex. The dialogue used was a poor choice. This scene ends with Marlo having Tully dress up and fuck Drew in a way he's fantasized about and I just couldn't help but feel gross about the entire thing. This got way too close to to the suggestion of martial rape for me. I know that's now how Cody was writing it, but it was barely above "Well, you as the woman are responsible for pleasing your husband no matter how you feel" that I was really just put off. That to me was handled worse than not naming her medical condition. It's a personal opinion and I don't expect many to view that scene as I did, but like I said. It just got too close to "wtf territory" for me.

So there you have it. No, the medical condition wasn't handled perfectly, but maybe that was Diablo Cody's point. She already said this film is for people that don't get help. Maybe not having someone explain exactly what's wrong is part of that too. Marlo already dealt with no diagnosis for her son, maybe she's not meant to get one either.
.
.
.
.
.
END SPOILER