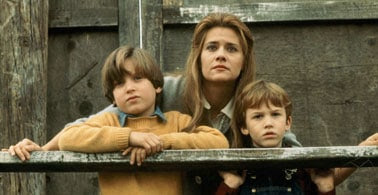 Recently, I was talking to someone about who I thought were the best child actors when I was also a child.  Two that really stood out to me were Elijah Wood and Joseph Mazello, and one film those two were in together was called Radio Flyer. Then I was reminded about the uniqueness of this film. Instead of reviewing the film, I wanted to have an open discussion about the ending.

It deals with a tough issue; child abuse. What I’ve noticed is the way that the film ends is interpreted many different ways, and the filmmakers never came forward to say what was right and wrong. I’m interested in hearing everyone’s opinions on it. How did you interpret the ending? Obviously spoiler alerts will follow..

For those of you who haven’t seen the film, the basic premise is this: Two young boys, Mikey (Wood) and Bobby (Mazello) move in with their single mother and her boyfriend, who refers to himself as ‘The King’. It doesn’t take long for The King to start physically abusing Bobby, and the mother turns a blind eye. The end of the film shows the boys building their Radio Flyer (named after the red wagon they have) for Bobby to fly away and be free of The King. He succeeds, and we are being told this story by the adult Mikey, who in turn is telling it to his own children. Now, I’ve read people’s opinions on the ending, and these are the most common ones I’ve found. Please excuse me if I’ve left one out.

1) Bobby was actually killed by The King, and this is just Mikey’s way of coping with it. But telling his children that his brother really did fly away in his wagon.

2) There was no younger brother, it was all in Mikey’s head. This was just a way of him coping with his own abuse. He imagined that he had a weaker younger brother that was really the brunt of all the abuse.

3)There was no older brother, same situation as the previous, only it’s the abused child pretending he has a strong older brother.

4) The kid actually did fly away in his magic wagon.

Now, I was five when this movie came out, and I remember seeing it on TV around the age of seven or eight. So at my young age, the thought of Bobby actually flying away in a wagon wasn’t too far-fetched (hell, the clown from The Poltergeist seemed pretty real to a seven year old) I thought okay, it was a fantasy film and that’s how it ended. Then re-watched it as an adult, and it got me thinking. This wasn't the film I remembered.

I see it now as reason 1. Bobby really died after a particularly intense beating from The King. (Though some think he died when he plummeted to his death in the Radio Flyer, but the beating makes more sense to me) When elder Mikey is telling this story to his children, they question his ending. He says he can change it since he’s the one telling the story, which to me meant that his children were aware their uncle was dead, but he wasn’t revealing exactly how. The “letters” that Mikey gets as an adult from his brother, that I couldn’t really explain. Maybe he writes them, maybe his mother felt guilty and wrote them. (though that’s a bit extreme to continue it into adulthood) What do you think? I’ve heard theories that when Mikey is being beat up during the game of football he is playing with the neighborhood kids is just his way of handling the beat down from The King. Good point, I can see that. Some people point out during the film that the mother really doesn’t address both boys at the same time. (which I disagree with) I think there were two boys.

ETA: Since I published this post back in 2010, This popped up about a year later. It's referenced a few times in the comments, but I figured I would edit my original post to show that I have indeed read it.
Random Ramblings