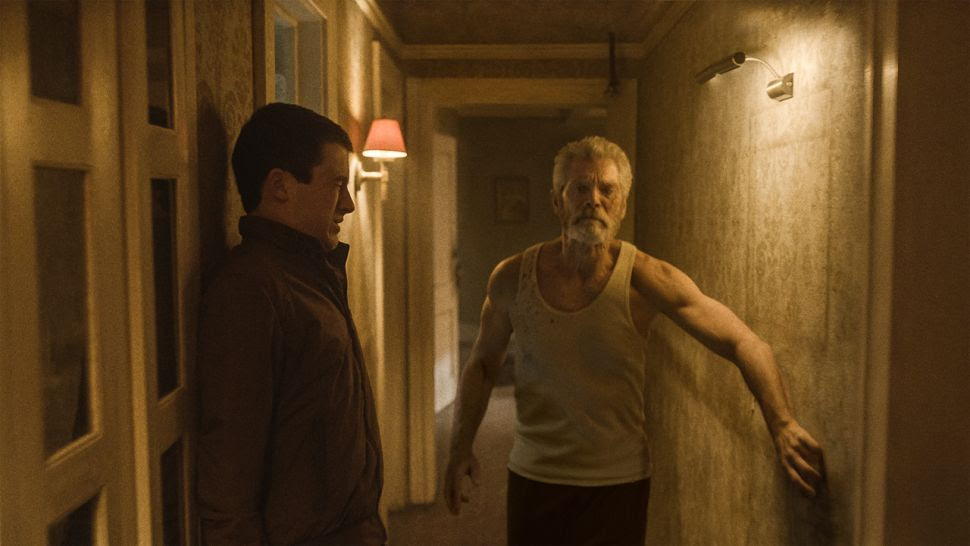 Rocky (Jane Levy) is sick of being stuck in Detroit with her abusive mother and dreams of a better life for herself and her younger sister. She and her boyfriend Money (Daniel Zovatto) and their friend Alex (Dylan Minnette) decide to rob a blind man's (Stephen Lang) house. He settled for a six figure pay out when a rich family causes the death of his daughter and they believe it to be hidden in the house. Of course, nothing about this robbery goes as planned.

I usually stay away from home invasion movies, they tend to all feel the same to me, but this one was getting great reviews and I enjoyed Levy in the Evil Dead remake and what I saw of Suburgatory. I'm glad I gave it a shot, this movie didn't go where I was expecting it to at all.

I love when movies make you question on who you should be rooting for. I haven't seen a film do it this well since I Saw The Devil. It relies a less jump scares (though there's definitely a few) and more on the sense of building dread. I found myself tense throughout as I kept thinking something would happen at *that* moment, only to find myself still waiting.

The acting from Levy and Minnette is very good, and Lang is extremely menacing. Zovatto is pretty terrible but he's not in it enough to ruin it. (That's not a spoiler, it's revealed in the trailer) It's not very gory, I was actually surprised to see that it had an R rating because it felt like a good PG13 throughout, which is so rare.

Even if you don't like horror films, I have to suggest this one on general fucked up-ness alone.

Memorable Quote: "Whatever you choose, I'm with you." - Alex (Dylan Minnette)