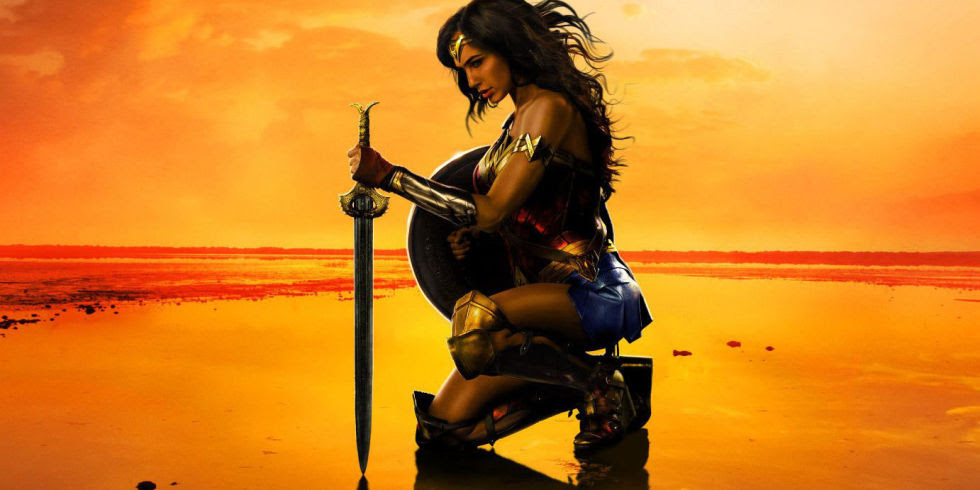 We've already met Wonder Woman (Gal Gadot) in Batman v Superman but in her solo film we see her as Diana, a princess in her hidden land of warrior women called Themyscira. They're sworn to protect man from Ares, the God of war. When a WWI pilot, Steve (Chris Pine) breaches their barrier and washes up on shore. Diane goes with him to help save innocent lives after he tells her of the Great War.

DCEU finally has a film on their hands that isn't a complete trainwreck, and that feels good. But am I going to lose a little blogger cred here if I say that I didn't like all of it? Don't get me wrong. The majority of this film is amazing. The first time we see Diana dawn her costume, walk into "No Man's Land" solo, with her perfect theme music picking up at just the right moment was masterful. I couldn't believe how emotional I felt watching it. It was stunning, I thought I was actually going to cry for a minute, but the climatic fight scene at the end is horrendous. They had elegant and strangely gorgeous fight choreography through out, but the 3rd act sacrifices all that to special effects that don't live up. I'm actually shocked that something so bad happened in a film that was so good right up until that moment.

Thankfully, that's not enough to sour the movie. Gal Gadot really captures Diana's naivety. Whether she's seeing a baby or tasting ice cream for the first time, it's so sincere to witness. Because of that, I couldn't really get behind her and Steve's eventual romance. Or at least one part of it. It just felt strange. Pine does a good job too. He's an actor I always find easy to watch. The supporting cast is diverse and fun, with the exception of David Thewlis for reasons I can't really get into without spoiling. But most of all, I'm so happy for director Patty Jenkins. She hasn't directed a feature since 2003 and she opened this one to 100 million. Now that's wonderful.

I think it's a testament to how great comic book movies can be when they make us love characters we didn't when reading said comic books. I never liked Wonder Woman until now. Just like I didn't care about Iron Man until Robert Downey Jr. stepped into his shoes. Gadot and that glorious theme music will make me root for her from here on out.