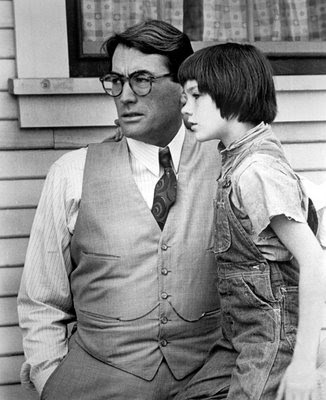 Everyone has their favorite thing to do on a rainy day. Currently, it's pouring here and work is slow. One thing I like to do on a rainy day is watch black and white movies. I really can't explain why, it just puts me in the mood for them I guess. I thought I'd review one of my favorite old films.

'To Kill A Mockingbird' is based off of Harper Lee's best selling novel. It revolves the Finch family during the depression era. It's told through the eyes of 6 year old Scout. (Mary Badham) She's a tomboy that loves tagging along with her older brother Jem (Phillip Aford) and idolizes her father Atticus. (Gregory Peck) Atticus is a very smart, gentle man. He allows his children to call him by his first name, he teaches them lessons about life. He also happens to be appointed to defend a black man falsely accused of raping a white woman. Atticus isn't racist, neither are his children. He knows he's got a tough job ahead of him and his children want to see it all play out. Besides the trial, there is also another story, the mystery of Boo Radley (Robert Duvall) Scout and Jem, along with all the other children are afraid of him, but they've never seen him. They know not to go by the Radley house. However their curiosity grows when they start finding objects in a knothole in the tree in front of the Radley House.

I'm sure the majority of you came across 'To Kill a Mockingbird' the same way I did. In school. It was a book assigned to me to read in grade 10. That same semester I also had to read 'Moby Dick' and 'The Scarlet Letter'. Guess which one didn't suck? The book really held my interest. It was a great story and you really, really wanted to know how everything turned out. When our teacher let our class vote on which movie adaptation we wanted to watch from those 3 books, Mockingbird easily won.

I was already familiar with Gregory Peck from films such as 'The Omen' and 'Roman Holiday' but this was my favorite performance of his. I was a movie buff back then too, but not nearly as serious as I am today. Mockingbird helped that. I loved Peck's performance, and he really was how I pictured Atticus in the book. Mary Bedham gave a great (and Oscar nominated) performance. She was really a joy to watch. The film was very close to the book, and that's nothing something we get to see very often. This is one of those movies that they try to remake and fail miserably. There will never be a better adaptation of 'To Kill a Mockingbird' then the 1962 classic. It really captured the feel of the book and of the depression era. It taught a valuable lesson. When you think of a strong figure in your life, whether it be a parent, relative, friend, You can't help but associate that person with Atticus Finch. Even though he was a fictional character, he holds many of the same qualities that you want in someone you look up to.

Memorable Quote: "Well, I reckon because mockingbirds don't do anything but make music for us to enjoy. They don't eat people's gardens, don't nest in the corncrib, they don't do one thing but just sing their hearts out for us." - Atticus Finch (Gregory Peck)
at April 26, 2010

Review: News of the World