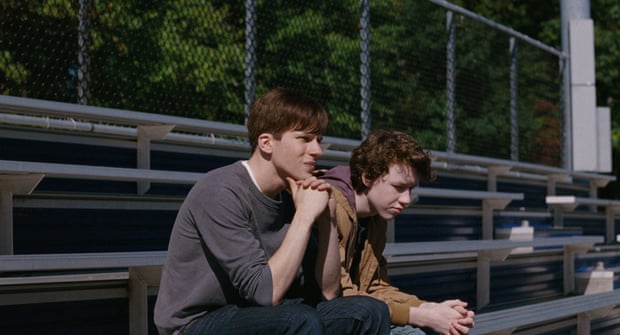 Three years ago, Isabelle, (Isabelle Huppert) an accoplished war photographer died in a car crash. Now, someone is planning on writing an article about her death and it brings her husband Gene (Gabriel Byrne) young son, Conrad (Devin Druid) and adult son Jonah (Jesse Eisenberg) together for the first time in a while and forces them to come to a mutual understanding of how they remember her.

This is director Joachim Trier's first English language film, he did the wonderful Oslo, August 31st. He approaches Bombs in the same way. It's very quiet and almost cerebral. We spend a lot of time in our characters' heads listening to their narration. Sometimes they're not reliable narrators, or other people say what's in their minds. It's an interesting approach.

Devin Druid gives the strongest performance here, as he's tasked with being the most angry and kept in the dark about his mother's death. Gene is somewhat resenting her and Jonah worships her. He may be another moody teen but circumstance makes him more interesting than most.

I do wish the film would've elaborated on a few more things, mainly a sub story with Jonah and his wife. Aside from that, this was a very enjoyable film.

Memorable Quote: "You know, if I had a girl, I'd never lie to her." - Conrad (Devin Druid)
Indie Gems