Review: The Kids Are All Right

I didn't notice the title was written like that either. 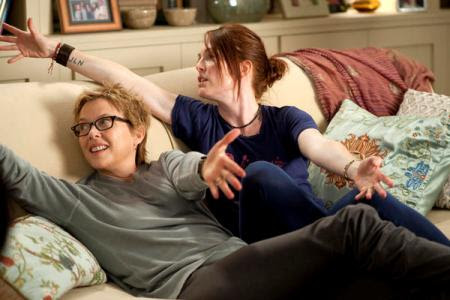 The one word that comes to mind when I think of this film is "appreciation." In my opinion, some one's sexuality is probably the least interesting thing about them. That's how this film handled our gay couple's relationship. It didn't make a spectacle of it, it didn't make it into a joke or pun or a disadvantage. They treated it like they would any other couple. That's the way it SHOULD be.I also appreciated the layers they give this story, it was so interesting that at the end of the film I was still wanting more information. Yet, I didn't feel like it completely came up short.

Nic (Annette Benning) and Jules (Julianne Moore) are your average hard working moms. Nic is the stricter, leader of the family. Jules is the loving free spirit. They've raised great kids, Joni (Mia Wasikowska) and Laser (Josh Hutcherson who really stand apart from their crappy friends. Joni has just turned 18, and Laser is begging her to make the call to find out who their Father is. See, both Nic and Jules were artificially inseminated by the same man. That man is Paul, (Mark Ruffalo) a laid back restaurant owner/organic farmer. The children first set up a meeting in private, then accidentally let it slip to their moms. Eventually Paul meets the entire family, and thus we start our story.

I don't want to give away details to the plot, so I'm afraid I have to be vague. Doing a complete review would require me to spoil a lot of the really interesting parts of the film, and I don't want to do that. The Kids Are All Right screams "Oscar bait," and that's ok because it is so deserving. Benning and Moore shine in their roles as usual, but it's Ruffalo who surprised me the most. I've never been the biggest fan of his work, but this film made me want to pay more attention to him now.