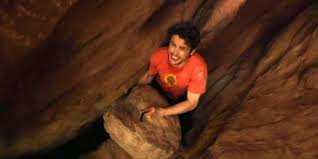 It's no spoiler what happened to Aron Ralston. (James Franco) In 2003 he left to go hiking in the middle of the night, he didn't tell anyone where he was going. He ends up falling in a canyon with a giant bolder crushing his arm. He tries to free himself, but he cannot. 5 Days later, he's out of water, and out of ideas. He has to cut his own arm off to survive.
Franco plays Ralston to perfection. We see a fun-loving, easy going, maybe even a little bit of an arrogant guy at the beginning of the film. When he gets stuck, we see this quick thinking hiker slowly turn from slightly panicked, to angry, to down right horrified. He's aware of his fate, he's video taping his good bye's to his family to pass the time.
Danny Boyle was the perfect director for his film. His signature quick cuts really add to the beauty of the film. Partnering back up with his Slumdog Millionaire composer A.R Rahmen also adds catchy music to the mix. While is drags slightly in the middle, it holds your interest throughout. It helps that you know that the film has a happy ending, but it doesn't take away from the horror that Ralston really lived through.
Recommended: Yes
Grade: A-
Memorable Quote: "Wait a minute, you didn't tell ANYONE where you were going?? Oops." - Aron Ralston (James Franco)