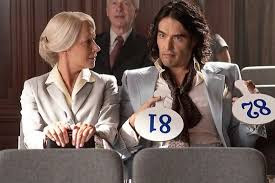 At least it is to Arthur. ( Russel Brand) He's a rich, boozy, man child that's heir to a $950 billion dollar fortune. His erratic behavior doesn't set well with his mother, who tells Arthur he has to marry an uptight go-getter, Susan. (Jennifar Garner) Arthur isn't too keen on this idea after he falls in love with a aspiring writer/illegal tour guide named Naomi. (Greta Gerwig) Arthur tries to hide the fact that he's set to be married and sees Naomi behind Susan's back. He does all of this while under the care of his very patient nanny Hobson. (Helen Mirren)
I never saw the original Arthur, so it's impossible for me to compare this remake. Arthur had a lot of funny moments, but it soon treads into downright depressing waters. The ending involving a bunch of school children briefly redeems it, but it still felt like a harsh turn to such a light hearted comedy. I'm a big fan of Brand, but I think he does better when he can be at his raunchiest. The PG13 rating felt like it held him back a bit. He wasn't unfunny, (though his high pitched voice in the beginning of the film is beyond weird.) he's just better when he can let loose. (See: Forgetting Sarah Marshall) Helen Mirren was charming as always, there really isn't anything she can't do.
Recommended: Sure (yes, I'm adding "Sure" to my recommendations, because I've been so split on films lately. I'll try to us it sparingly.)
Grade: C+
Memorable Quote: "I'm telling you because I want you to feel bad." - Hobson (Helen Mirren)