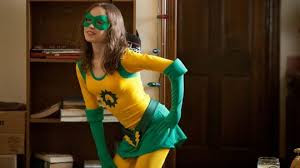 Frank﻿ Darbo (Rainn Wilson) has lost his wife Sarah (Liv Tyler) to a manipulative drug dealer named Jaques. (Kevin Bacon) Frank has always been the loser in life, and Sarah was the one thing he loved most. Now she's gone. Frank has a vision that he is touched by the finger of God (campy CGI at it's best) and that he must rise against. The only thing that makes someone a hero is that they stand up for crime, and that's what Frank is about to do. He creates The Crimson Bolt, and runs around bashing druggie's, pedophile's, line cutter's, and other wrong doer's faces in with a wrench. Along the way he picks up a side kick, Boltie, in the form of Libby. (Ellen Page) She's a comic store clerk that initially gives him ideas for his hero, she probably has ADHD and is perhaps a little borderline. She gets out of control, but it turns out that's what Frank needs.
I imagine Super is what Kick Ass was trying to do. (and maybe would've succeeded had they left the annoying Nic Cage and Chloe Moretz off of the bill) Super starts off with a lot of laughs, but then goes into a very dark place. It's almost not fair to call this a comedy, because there is some serious things that happen. Sure the film is littered with cartoon effects and cheap blood gags, but beyond that it tackles some serious issues. The ending for me was a draw. I found it sweet, but also kind of a downer. I had expected it to get chaotic, but the serene ending came off as slightly contradicting.
Rainn Wilson really impressed me here. We're used to just seeing him as a nerdy, funny guy, which he still is in this. However he tackles the dramatic side with ease. Ellen Page was a real treat. I'm bias because she's one of my favorites and I love her in everything, but it was really nice to see her play a character that isn't the smart, wise beyond her years type. Libby is erratic, loud, and a date rapist. (just watch it.) Liv Tyler and Kevin Bacon don't have a lot to do, but their presence is felt. Not to mention Bacon has some of the best lines in the film.
Recommended: Yes
Grade: A-
Memorable Quote: "This is about her loving me more because I...am..fucking...INTERESTING!" - Jaques (Kevin Bacon)