- April 18, 2011
This is what happens when David Bowie reads you Sci Fi books for two hours every night. 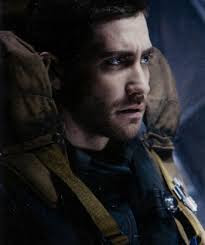 At least that's what director Duncan Jones said in an old interview about his father. Jones has been a huge fan of sci fi every since. It showed with his spectacular and highly underrated first film Moon. Now he follows up with Source Code; Jones seems to have a bit of a theme going here, but I can't tell you what exactly that theme is without spoiling the whole thing.
Capt Colter Stevens (Jake Gyllenhaal) wakes up on a train. He doesn't know how he got there. When he looks in the mirror, he's in somebody else's body. Everyone seems to know him as this person, but before Colter can do anything else the train explodes. He finds himself in a pod, talking to a woman named Goodwin (Vera Farmiga) via video chat. He's part of a mission that puts him in another person's body during the last 8 minutes of their life. He's not there to alter the event, but to find the bomber and to see if there are any more targets.
I didn't have any expectations going in. I'm a fan of Gyllenhaal, but I was afraid this movie would be like Vantage Point and get annoying with it reliving the same moment over and over. Luckily it didn't.
I'm really started to love Jones' work. I hope he does a lot more. Source Code was completely different than I expected and the ending caught me off guard. That's the main reason I recommend the film; the ending. It must be a good one right? Not exactly. In fact, as unique as the ending was I thought it asked a few more questions than it answered. After pondering those questions I almost wish the film would've went in a slightly different direction. Nonetheless, it's very interesting and worth the watch.

Recommended: Yes
Grade: B
Memorable Quote: "Everything is going to be ok." - Colter Stevens (Jake Gyllenhaal)