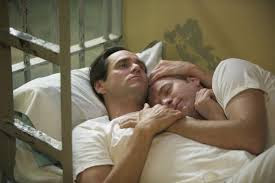 Steven Russell (Jim Carrey) is a happily married man with a steady job. After a near death experience in a car crash, Steven decides he's going to live his life to the fullest and be who he's always wanted to be. This means coming out as a gay man and living in style. After he divorces his wife and moves to Florida he soon finds out that his way of living is expensive. So he begins to commit fraud, gets arrested, sent to jail and ultimately meets the love of his life, Phillip Morris. (Ewan McGregor) Phillip is shy, kind, and timid compared to Steven's outgoing personality. Steven soon realizes he will do anything to stay with Phillip, even if that means getting transferred to the same ward, and going as far as pretending to be a lawyer to get Phillip out of jail. When they are both out and trying to start a normal life, Steven can't help but fall back into his shady ways.
I have absolutely no idea why this movie did not get more attention. I remember when I was predicting my Golden Globe nominations last year I had Jim Carrey as Best Actor in a Comedy and this movie as Best Comedy. Neither made the cut, and that's surprising. Carrey gave his best performance since Eternal Sunshine and McGregor was spot on as usual. He radiated charm and kindness and you can immediately see why Steven would love Phillip so much. He was just so innocent. The film could've easily went down the path of raunchiness with some of it's dialogue but it kept it simple and fun. While the situations in the movie are serious the humor is consistent throughout. It never once becomes too over the top, no matter how deep Steven gets into his lies.
Recommended: Yes
Grade: A
Memorable Quote: "Or you could just suck his dick." - Steven Russell (Jim Carrey)
Indie Gems