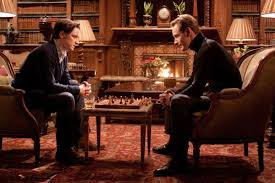 ﻿Being someone that's read so many comics over the years, one thing I've learned is that its best is to completely separate them from the movies. The same can be said for X-Men: First Class. Although I found it a little hard to do that at some points throughout the film. Another thing I felt I had to do was separate it from the previous installments that it was serving as a prequel for. There were some obvious inconsistencies, but when you look past that First Class was a great film to stand on it's own and I would rate it 3rd amongst the 5 X-Men movies that have been made.
First Class follows a young Charles Xavier (James McAvoy) before he's known as Professor X. He's a student at Oxford doing research about mutations. After revealing himself and his "sister" Raven (Jennifer Lawrence, the future Mystique) as mutants themselves the CIA brings them in to help get their hands on Sebastian Shaw (Kevin Bacon) and his associates. We also see the story of Erik Lehnsherr, (Michael Fassbender) before he's known as the powerful Magneto. He was taken to the camps by the Nazi's, where a younger Sebastian Shaw (though known by a different name) shoots Lehnsherr's mother in order to bring out his gift of moving metal. Erik learns to better control his gift, now he's got a death wish for Shaw. He tracks him James Bond-style all over the globe and eventually runs into Xavier. They band together a group of mutants and will take care of Shaw for good.
The high light of the film was definitely McAvoy and Fassbender's performances. They both had me convinced that they would one day be the two powerful mutants we're so familiar with. McAvoy shows his genius while Fassbender shows his ruthlessness. Kevin Bacon was a nice surprise too. The trailers didn't really feature him and I will admit I completely forgot he was in it until he appeared on screen. Bacon is one of those actors that I spent a lot of time disliking but have recently been drawn into his performances. He gets better with age. The same cannot be said for the supporting cast. Jennifer Lawrence, while great in Winter's Bone couldn't convince me that she turned into the Mystique we're familiar with. This goes back to trying to separate the two, but having a hard time doing so. I tried not to compare, but it was almost impossible. January Jones was horrible as Emma Frost. Plain and simple, she was wooden and her lines felt forced. The rest of the mutants didn't get enough screen time to show their personalities, but I didn't find them as interesting as the mutants in the past films.
The special effects were on par with the first two. I was afraid this prequel would fall into Wolverine-like territory. What I mean by that is cheap special effects, but I was happy to be wrong. While the film sometimes dragged it was packed with action sequences that were stunning to watch. There's nothing after the credits, but it does have one of the best cameos I've seen in a long time.
Recommended: Yes
Grade: B-
Memorable Quote: "Do not touch my hair." - Charles Xavier (James McAvoy)