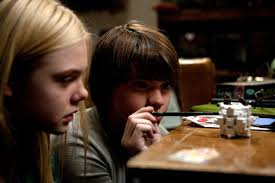 In the summer of 1979 a group of children making a zombie movie witness a Michael Bay worthy train crash. This is more than just a freak accident. Soon, mysterious things start to happen in their small town and they take it upon themselves to get to the bottom of this.
It's obvious that director JJ Abrams along with producer Steven Speilberg were going for the nostalgia factor. They were basically re-creating the films that Speilberg used to make and it works wonderfully. I was afraid this movie was going to be too kiddie going in. I'll admit after I saw the original teaser trailer and then found out the the film was going to be centered around children I felt a little let down. I'm glad to say I was wrong. The kids in this film were great. While they aren't the best batch of actors the dialogue they were given was hilarious and helped set the tone. I actually ended up finding the adults to be the corniest part of the movie. The film makers did a great job of keeping the creature under wraps throughout most of the film, so when we finally saw it we were surprised. The ending to me felt a bit rushed compared to the slower pacing of the rest of the film.  Overall, the effects were great (Thank God it wasn't in 3D) and the story felt fresh.
Recommended: Yes
Grade: B
Memorable Quote: "Drugs are so bad!!" - Charles (Riley Griffith)﻿