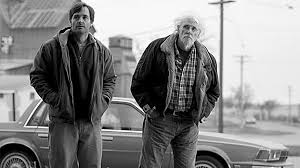 Woody (Bruce Dern) is an elderly man from Billings, MT who received a letter in the mail saying he won $1,000,000. It's an obvious scam, as his son David (Will Forte) points out. But Woody is determined to go to Nebraska to claim his price. After several attempts of walking there himself, David finally agrees to drive him, much to the disdain of his mother, Kate. (June Squibb)

Despite enjoying Alexander Payne's work, Nebraska wasn't something that caught my interest early on, but I'm happy to say that it was a very enjoyable film. I normally don't care for modern black and white movies. Yes, there are a few gems here and there, but when budget allows you to shoot in color and you shoot in black and white, you risk coming off as a hipster for lack of a better word. I think the reason it worked so well for me was because I'm from the Mid West. I'm used to seeing the rolling flat plains, they're boring as hell, but Payne shooting in black and white actually made them look more beautiful. I didn't think that was possible.

Dern and Squibb both got Oscar nominations for their roles, they were definitely deserved. Squibb makes the most of her small amount of screen time while Dern carries the film. I remember reading an interview with Will Forte where he said he felt out of his league acting along side the likes of Dern and Squibb. There was honestly only one scene towards the end where I think he looked overwhelmed. Otherwise, I thought Forte was a nice addition. It's great to see him do something a little more serious. Plus, this movie includes Stacey Keach getting punched in the face, and that NEVER gets old.

Memorable Quote: "I just wanted to leave you boys something." - Woody (Bruce Dern)