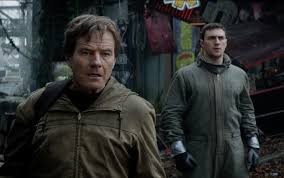 Everywhere he goes, monsters show up.

All kidding aside, Godzilla follows Brody (Aaron Taylor-Johnson) who is called back to his childhood home in Japan when his father, Joe (Bryan Cranston) is arrested for trespassing into former nuclear reactor zone. You see, Joe used to work there, and an accident happened in 1999 that caused the death of his wife. Now, the same thing is happening again, and he no one believes him when he says they're similar. Ford is reluctant to help at first, but follows his father. Two scientists, Dr. Serizawa (Ken Wantanabe, who permanently looks like he cannot believe what the fuck you are talking about) and Dr Graham (Sally Hawkins) know what's going on, but even they can't predict the destruction that lies ahead. On top of all of this, Ford is trying to get back to his wife, Elle (Elizabeth Olsen) and their young song back in San Francisco, where all this chaos is heading.

Godzilla really has all of the things a good monster movie needs. Likable leads, great special effects, cheesy dialogue, and a fantastic score by Alexandre Desplat. They sure knew how to build to the climatic fight scene between Godzilla and the M.U.T.O. Just when you thought you'd see them fight, the camera cut away. I've read some things were this bothered some, but I thought it was brilliant. I especially loved how our first shot of them fighting was on a news broadcast, watched by a four year old.

Overall, Godzilla isn't trying to be some critically acclaimed masterpiece, so it doesn't need to be treated like one. What it does succeed at is being massively entertaining, and is far better than the 1998 version. That's all a remake can really ask for, right?