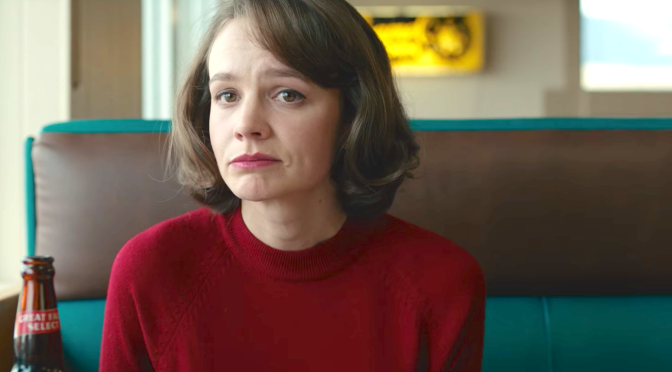 Fourteen year old Joe (Ed Oxenbould) is put in a tight spot when his father, Jerry (Jake Gyllenhaal) loses his job, then goes out to fight wildfires in rural  Montana against the wishes of his mother, Jeannette. (Carey Mulligan)

I have been waiting for this film since it premiered at Sundance. It's directed by one of my favorite actors, Paul Dano, and it's his first time behind the camera. And I'm always down for Mulligan and Gyllenhaal. To say I had high expectations for this would be and understatement.

And I'm happy to say all those expectations were fulfilled. This isn't the most exciting film out there, and because of that I know it won't be for everyone, but I can't find a thing wrong with it for what it is.

Oxenbould is definitely one to watch. I wish the Oscars didn't hate men under the age of 20 in the Lead Actor so much because if there's any justice, he'd be there. Unlike a lot of films told from a teen boy's perspective, he never has that moment where he completely loses it and lashes out. Instead he quietly wears the weight of his mother's decisions all over his face. It affects everything he does.

Dano shoots this 1960's setting wonderfully. He doesn't attempt to copy someone else's style, or go for those over saturated "art house" shots that are oh so tempting. He just lets his camera be, and he catches his actor's expressions in a way that's very intimate.

And this brings me to Carey Mulligan, who is the undisputed star of this film, and I wanted to discuss her character as part of Dell's awesome Girl Week. Mulligan gives the best performance I've seen all year from any actress. But her character is not "traditionally likable". She was called out during a Q&A earlier this year where a (male) critic said he had a hard time with her character because of how she behaves. Mulligan of course had a beautifully eloquent remark about people not being used to seeing this messy side, and I can't agree with her more.

What Jeannette does in this film is very irresponsible, but I never hated her for it. I judged the hell out of her parenting for sure, as a mother of a young boy myself, how could I not? But I loved how unapologetic the film was about. Jeannette got dealt a shitty hand. By her own admission, she has no friends, she isn't doing the job she loves, and now her husband went off to possibly die for $1.00 an hour. She's essentially going through a mid life crisis a few decades early. She dresses how she did when she was young, she slacks off on her homemaking duties. Maybe she never loved doing that to begin with, but I found her depression very believable. Like her son, she holds a lot of it in. There's no huge breakdown moment. She's almost professional in her anger and that's something I feel like we don't see often enough.

As it stands now, Carey Mulligan should be winning that Best Actress Oscar.

Memorable Quote: "He fought in two wars and never learned to swim...imagine that." - Jeannette (Carey Mulligan)