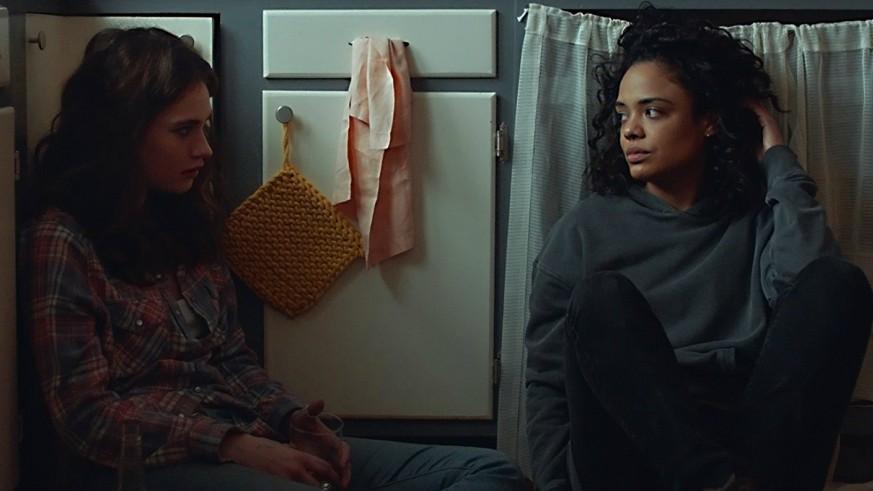 Ollie (Tessa Thompson) is trying to lead a straight(er) life after getting caught running drugs over the North Dakota/Canadian boarder. When her sister Deb (Lily James) falls pregnant and knows she can't afford to have the baby, Ollie turns to dealing again for hopefully the last time.

First off, thank you all for leaving comments on the two posts I had scheduled while I was on vacation. I'm currently typing up a bit of content, then I'm off to read your lovely blogs. Even when I travel I normally set aside time each night to check out my blog roll, but I was EXHAUSTED at the end of each day. I'm happy to be back in the swing of things.

I had to laugh when I started watching this movie and realized it was set around the area I grew up in. (Though they choose a fictional name for the town) They certainly capture the despair and general bleakness of Western North Dakota well, especially now that oil drilling is so common there. The desperate need of affordable health care is prevalent and I found the way the film addressed that to be very believable.

Tessa Thompson gives a very understated performance here that I just adored. Ollie is a good person trying to make the best out of hard times, for herself and her mess of a sister. I enjoyed Lily James in this role too. I felt like it was fairly different for both of them.

I give this major props for not going with the ending that I was sure they choose. It's a very quiet film, there's not a lot of action nor excitement but something like this is rare. We have so many films about trafficking drugs through the Mexican boarder but barely any that address the desperate need for pain killers and how some attempt to get fake Canadian ID cards just so they can afford basic health care.

Memorable Quote: "How do you always manage to fuck things up?" - Ollie (Tessa Thompson)
Indie Gems