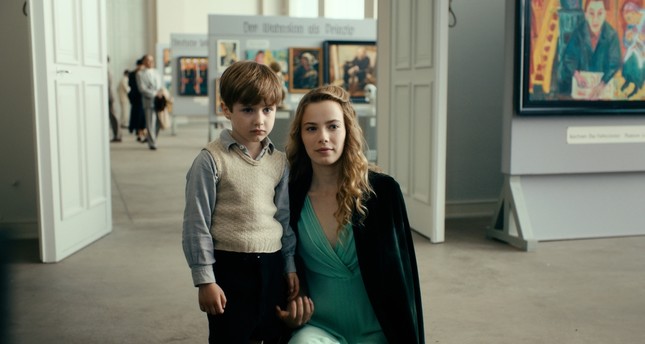 Kurt Barnert (Tom Schilling) is an artist in West Germany. He's often haunted by growing up during WWII, and how his beloved Aunt Elizabeth (Saskia Rosendahl) who fed his creative spirit was sent to her death by the Nazis because of her mental illness. He meets and marries Ellie (Paula Beer) whose father, Professor Seeband (Sebastian Koch) doesn't approve of Kurt and unbeknownst to him is the same doctor that is directly responsible for his aunt's death.

I saved this movie into my Netflix queue after this year's Oscar nominations came out. Never Look Away was not only a Foreign Film nominee, but was also a surprise entry into the Cinematography category. What I didn't notice until I opened the DVD Netflix sent me is that this movie was over three hours long. It's probably for the best I didn't pay attention to that before because I'm not sure if I would've put in the effort otherwise.

Is every bit of its hefty run time warranted? Of course not. There's a point in this film where Kurt and Ellie move to Dusseldorf and the film absolutely stalls. The first hour flies by and is very engrossing but I checked my watch once I was rounding out two hours it's like the film is moving slower on purpose. I almost wonder if you'd still get the jist of everything if you put the last hour on fast forward. Another thing that I think works against the film is the outcome. You know Seeband is going to figure out that he killed Kurt's aunt. But because Kurt wasn't there to see him give the order, there's really no satisfactory resolution from Kurt's end. It's only semi satisfying to the audience but it still left me wanting more to come from that.

Schilling, Koch, and Rosendahl are all German actors that I enjoy and have seen before. Koch of course was in director Florian Henckel von Donnersmarck's last German film, the wonderful The Lives of Others. They're all fantastic here and von Donnersmarck's direction is excellent. And yes, it absolutely deserved that cinematography nomination. There's not a single frame of this movie that isn't beautifully shot.

I thought a lot about Toni Erdmann after watching this, another long German film, and for comparison, I would say I preferred Never Look Away. If I'm honest I prefer this to the foreign film winner, Roma as well. It's too long, but it says enough to make me happy I spent the time on it.

Memorable Quote: "All that is true is beautiful" - Elizabeth (Saskia Rosendahl)
Indie Gems