1) Movie you love with a passion: American Beauty. I first saw this in 1999 when I was 12, and I loved it because it was about a family that seemed more dysfunctional than my own. (I didn't think that was possible) As I grew up I began to love it for so many more reasons, and it's always the first thing I recommend.

2) Movie you vow never to watch: I Spit On Your Grave. Either the original or the remake. I can't imagine a shittier movie based solely on the plot line. Women's empowerment my ass.

5) Actor/Actress you always watch no matter how crappy the movie: Joseph Gordon-Levitt. I love this guy. I love this guy so much that I sat through Havoc, Killshot, and GI Joe. Thankfully he doesn't make too many crappy movies, if someone asked me to play Cobra Commander I'd say yes too. Actress would be Ellen Page, I've always loved her, but man she made a few bad ones.

6) Actor/Actress you don't get the appeal for: George Clooney and Julia Roberts. He's not that hot and she's not that charming. They both aren't that great of actors either. I don't understand it.

8) Sexiest Actor/Actress You've ever seen: Fucking LOOK at Johnny Depp on the cover of GQ. Just look at him. This was a really hard question, by the way. 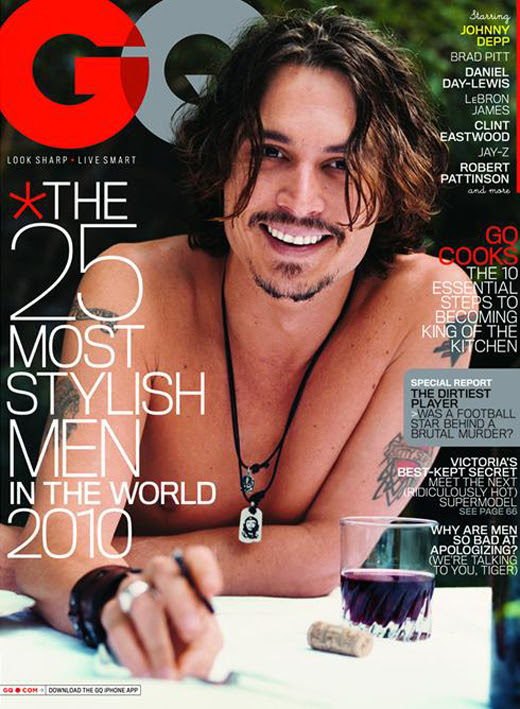 9) Dream Cast: Honestly, I nearly got it in Inception, but I would absolutely die for Joseph Gordon-Levitt, Johnny Depp, Christian Bale, Ellen Page, Evan Rachel Wood and Laura Linney in something.  Preferably directed by someone like Christopher Nolan, David Fincher, or Rian Johnson.
10) Favorite Actor Pairing: I seriously love Will Ferrell and John C. Reilly together. They can obviously do comedy together, but they are both talented enough to do drama if they tried. Shake n Bake! My heart beats for Joseph Gordon-Levitt and Zooey Deschanel as well.
11) Favorite Movie Setting: I love the feel of small towns in indie films. Movies like Dreamland, Brick, and Mysterious Skin feel so real because they don't look like they are shot on a sound stage. Even if they're not necessarily a "small town", just the feel you get in a good independent film is a good one. You know what I mean. I also love anything set in Europe. In Bruges, anyone?
12) Favorite Decade for movies: As lame as this sounds, 2000-2010. Sure we've had a lot of great eras in movies, but the 2000's allowed the technology to make films like Lord of the Rings and The Dark Knight possible, all while providing moving period pieces like Atonement, and little gems like Dreamland.
13) Chick Flick or Action Movie: Honestly, I don't care much for either, but I'll go with Action Movie. I tend to see more of those, and Chick Flicks have gotten so bad lately I just can't handle it. I don't think I've liked one since Mean Girls.
14) Hero, Villain, or Anti-Hero: I could pick one of each, but I'm going to single out my all time favorite villain in film: Heath Ledger's Joker. I can't accurately describe how much I loved his performance, and how devastated I am that I will never see him in anything ever again. As a life long Batman reader I thought Ledger owned The Joker through and through. He was a sadistic character who would paralyze someone and laugh about it. He deserved the Oscar he won, he's what drove The Dark Knight. Even when The Joker wasn't on screen, he's what you were thinking about. One of the best performances ever in my opinion, and I'll argue that one to the grave. Don't tell me Jack Nicholson was better. He wasn't.
15) Black and White or Color: This is pretty tough, actually. I'll go with color because I love lots of color. That's not to say I won't see a black and white film, because that's not true. I don't discriminate. One thing I really love is a black and white movie with a touch of color, Ala Sin City. That was beautiful.