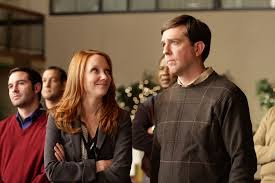 That's the philosophy of of Tim Lippe. (Ed Helms) He's a small town insurance salesman who views his occupation as that of a super hero. Saving other people when they are in need of it the most. It's actually a nice way to look at it. Tim has never left home and after a tragedy at work finds himself representing his place of business at a big convention in Cedar Rapids, Iowa. Naive Tim has trouble fitting in with his room mates, Ron (Isiah Whitlock Jr.) and Ziegler,(John C. Reilly) and doesn't quite know how to take the advances of Joan (Anne Heche) or even Bree. (Alia Shawkat)
Cedar Rapids is a comedy, but it never quite passes from just "ok" to "amusing." I found Ed Helm's character to be way too over the top to be convincing. He's almost too neurotic. Are we really supposed to believe that Tim would get traveler's cheques for a weekend visit to another state? Or that he wouldn't recognize a prostitute when he shares trysts with his own 7th grade teacher? Helms is constantly over shadowed by John C. Reilly who can turn just about anything into comic gold. Once the movie ends and the credits began to roll, the only think I could think of was "that was just all right." Not bad, but not good. Passable.
Recommended: Yes, for a rainy day perhaps?
Grade: C+
Memorable Quote: "I'm pre-engaged to someone!" - Tim Lippe (Ed Helms)﻿