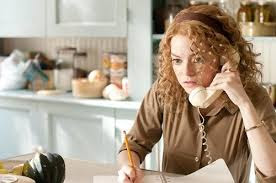 The Help proves this. Set in Mississippi in the 1960's, racism is a huge problem. We're told two stories here, one is Abileen's (Viola Davis) and one is Skeeter's. (Emma Stone) Skeeter is fresh out of college and wants to be a writer. She starts writing a house keeping collumn for her local newspaper and asks Abileen, a friend's maid, for advise. Hilly, (Bryce Dallas Howard) gets a law passed that requires each home to have a seperate bathroom for their hired help. Disturbed by this and the way some of the people in her town treat their help, Skeeter decides to write a book from their prospective. At first no maid will talk, but eventually Abileen does. She and Skeeter form a strong friendship as she writes her story, and eventually other maids join in. Doing all of this is dangerous and illegal, but they want to get their stories told.
I have to say this is probably the best emsemble cast I've seen all year. Everyone did such a fantastic job. Davis, Stone, and Octavia Spencer who plays fellow maid, Minny steal the show. Strong supporting acts from Sissy Spacek and Jessica Chastain help as well. This is definitely a cheer jerker. I found myself choked up several different times during the film and that really says something about how powerful it is. This isn't normally my kind of movie, but when it preaches an important message I'm willing to give it a chance. I'm glad that I did.
Recommended: Yes
Grade: A-
Memorable Quote: "You didn't eat just one, but TWO slices!" - Mrs. Walters (Sissy Spacek)﻿