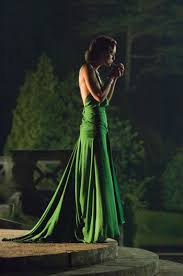 Robbie ( James McAvoy) is in love with Cecilia, (Keira Knightley) but after her younger sister Briony (Saoirse Ronan) witnesses something that she isn't sure she actually saw, she blames Robbie for a crime that he didn't commit. Instead of spending the rest of his life in jail, they give him the opportunity to join the army and fight in WWII. Robbie writes to Cecilia and hopes that they can one day be reunited. Meanwhile, as Briony grows older and realizes her mistake, she's set on giving up her dream of being a writer and to work as a nurse like Cecilia. A way of atoning for what she has done.
There are so many beautiful things about this movie. One that stands out first is the score. They were very clever to use a type writer sound in their music when we are first introduced to Briony, who is played wonderfully by Ronan as a child. The costumes were breathtaking, Cecilia's green dress has reached icon status in my opinion, and let's not forget about the story. Director Joe Wright brings us through at a perfect pace, then absolutely breaks every one's hearts all at once. Once you think you've forgiven Briony for what she has done, you start to re-think it. It's the perfect "tragic love story" in my eyes.
Recommended: Yes
Grade: A+
Memorable Quote: "I wouldn't necessarily believe everything Briony tells you. She's rather fanciful." - Cecila Tallis (Keira Knightley)﻿
Indie Gems