DVD Review: Rise of the Planet of the Apes 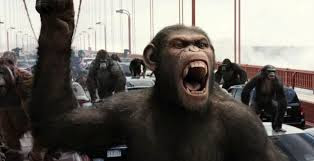 I've been pretty vocal on how ridiculous I think the title of this movie is. The working title, Rise of the Apes was much better, I don't care if it was tradition to do it otherwise. Any who..
Will (James Franco) is trying to find a cure for Alzheimer's, in doing so he's been testing his cure on apes. It increases their intelligence, but comes with fits of rage. When he takes home a recently orphaned baby ape, Caesar (motion captured by Andy Serkis) Caesar thrives and excels. But after an incident that gets him taken away from Will, he finds himself thrust into the real world of apes in captivity, and he's going to use his brains to start an ape revolution.
I thought I'd be annoyed with CGI apes throughout the entire movie, but I surprisingly wasn't. The special effects were great and the Caesar truly steals the show away from the rest of the actors. It was an interesting look at how the apes came into power in the originals, but the happy ending was a bit off for me. You know, because they eventually take over the world..
Recommended: Yes