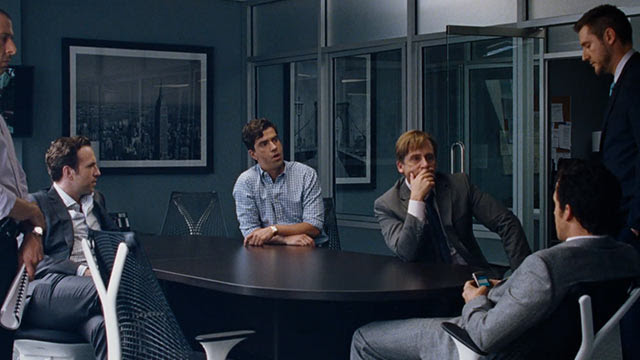 It all starts with Michael Burry,(Christian Bale) a hedge fund manager crunching numbers and realizing that the housing market is going to crash. He tries to bet against the banks and takes out bonds so that he'll make a ton of money when the housing "bubble" pops. Jared Vennett(Ryan Gosling) a bank investor overhears this from a Wall Street friend, and while trying to get in on it himself, he accidentally dials the firm of Mark Baum (Steve Carrell) and his colleagues Danny, (Rafe Spall) Porter, (Hamish Linklater) and Vinnie. (Jeremy Strong) They decide to go in with Jared, even though they don't trust him. Meanwhile, small time investors Charlie Gellar (John Magaro) and Jamie Shipley (Finn Wittrock) stumble upon Jared's paperwork and attempt to do the same thing with the help of their former banker friend, Ben. (Brad Pitt)

99 Homes tackled the housing market from the realtors and people directly effected by that earlier this year. Now we see the opportunists who tried to get ahead of it before it happened. This can be a hard film to love because it's about something terrible that happened and most of the guys are truly okay with it as long as they're making money. But the lightheartedness and Adam McKay's direction make this an easier pill to swallow.

I have to talk about Adam McKay first, because I love that he directed a film like this. I'm a huge fan of his comedies. I could quote Anchorman, Talladega Nights, and Step Brothers for days. This is a guy who works with comedians with strong improve backgrounds. He lets them do their thing, but that's not the type of film The Big Short is. He can't rely on shooting several different versions of the same joke. He adds some subtle comedic elements when he switches to a still shot of a character's reaction or uses pop culture to explain some of the heavier parts of economics. (Margot Robbie in a bubble bath) I'm just happy for the guy. He deserves all the success that The Big Short is getting.

The film has a great ensemble. I still don't think Ryan Gosling has the best comedic timing but he plays a convincing asshole and Christian Bale delivers in his very small part. The star is Steve Carrell. His character has some serious anger issues and eventually feels the weight of what he's doing. His chemistry with Strong, Spall, and Linklater is excellent and it's those four who drive the film.

My only huge gripe is that there isn't a strong female presence. Marisa Tomei and Adepero Oduye both had small blink and you'll miss it parts which is a shame for actresses of their caliber.

Memorable Quote: "Everyone is walking around like they're in a fucking Enya video." - Mark Baum (Steve Carell)