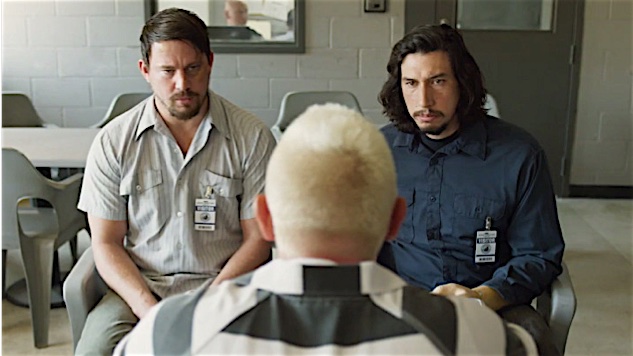 When his ex wife decides to move their daughter further away, Jimmy Logan (Channing Tatum) talks his brother, Clyde (Adam Driver) and their sister Millie (Riley Keough) into robbing the Charlotte Motor Speedway during a Nascar race. They need the help of an incarcerated thief, Joe Bang (Daniel Craig) to pull this off, so they find a way to temporarily break him out of prison to assist.

This film is a textbook example of actors elevating the material because script wise there were a lot of issues here. I felt like there were a lot of plot holes in their plan that they never properly filled in, and there were all these extra side characters played by Seth McFarlane, Hillary Swank, and Sebastian Stan that served little to no purpose. But there's something charming about Logan Lucky that makes it possible to look past these things.

Adam Driver was the standout for me. He's tremendous and while it has nothing to do with the film, I'm still baffled on why everyone is drooling all over Channing Tatum and not him. Daniel Craig does a great job finally playing someone different and Riley Keough is always solid.

I can see why this film wouldn't work for everyone. With a different cast, I don't think it would've worked for me. But it has some great laughs and an excellent cast. I think it makes it worth seeing.

Memorable Quote: "Did you just say cauliflower at me?" - Clyde Logan (Adam Driver)