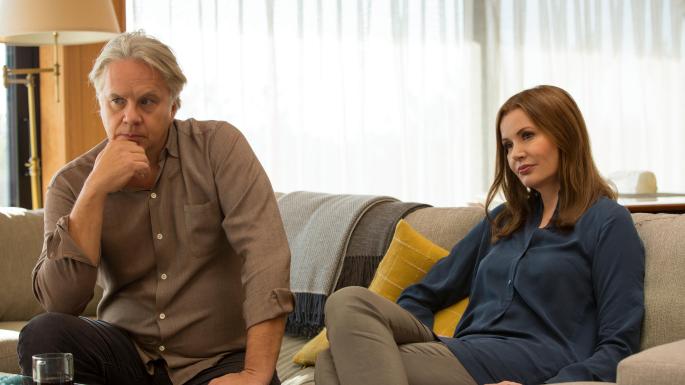 In the near future, a service provides holographic images of your lost loved ones so you have a chance to talk to them and cope. Marjorie (Lois Smith) is elderly and suffering from early dementia, but she chooses to speak with her late husband when he was in his 40's (John Hamm) Her daughter. Tess (Geena Davis) doesn't know how to process this, though her husband Jon (Tim Robbins) is very supportive.

You can tell this film is based on a play, but it doesn't come to life on screen the way say, Fences does. It's very quiet and relies on long cuts. The problem with this is that even though there's conversations going on, when we jump to a new timeline it's almost jarring and it took me a few seconds for my mind to catch up with it. Whose passed on, who's a hologram now, the film doesn't do the greatest job of seamlessly changing scenes.

I really like Lois Smith. I knew her from True Blood and she played this same role on stage. She's fantastic in this as she gets the most to do. The rest of the cast is decent as well, but they don't get much material to work with.

I think I expected this film to be a bit more. The sci fi elements were attractive but ultimately it just felt very slow and I was not satisfied at the end.

Memorable Quote: "Do you remember the movie? It was My Best Friend's Wedding." - Walter (Jon Hamm)