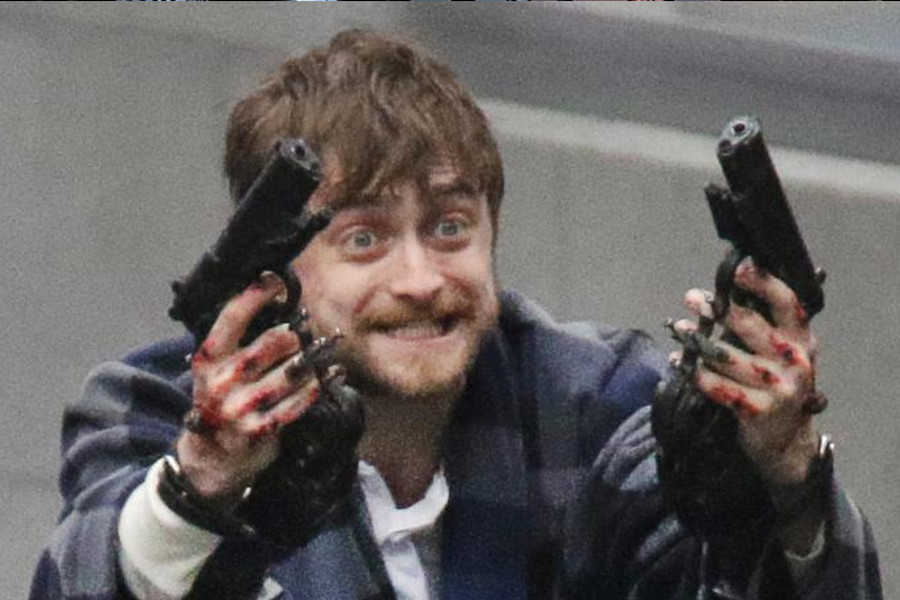 Miles (Daniel Radcliffe) is a hapless programmer by day, and online troll by night. Mostly, he argues with people in the chat rooms of a popular online fight to the death style show, Skizm. After pissing off Skizm's overlord Riktor (Ned Dennehy) they break into his apartment, bolt two guns to his hands, and place him in a match against Nix (Samara Weaving) with millions of people watching.
I've always been curious to see the movie behind the popular crazy Daniel Radcliffe meme above, and it was certainly as crazy as I expected, but unfortunately it wasn't as much fun as I had hoped.
At first, this movie won points for realism. Miles quips that Rambo would be studying sign language because of how loud the guns are when they go off and it physically hurts him to shoot because they're bolted to his hands, but then, like many other things, that's thrown out the window for plot. Take Nix for example, shown to be a master shooter. She's introduced to us in a drag race, which she wins. Then her character is further explained during a coked up montage where she kills a dozen men by herself. But of course when Miles shows up, she misses him every time she shoots at him. But don't worry, when the plot needs her to be a good shot again, she is. And Miles is too and his hands miraculously don't hurt anymore either.
It's just so inconsistent. I really liked the idea of the story and Daniel Radcliffe is very good but it's like the writers stopped putting thought into it after Miles enters the game. And I could make an excuse for the ridiculous plot armor if the film was humorous enough but it just wasn't. And I know I'm about to loose a bunch of internet points here, but Samara Weaving, who I normally love was awful in this. Her character has hands down the worst dialogue out of anyone and she unfortunately cannot sell it. Nix actually gets a tragic back story™ but the only scenes where Weaving can make her work is the montage sequences. Everything else falls apart when she tries to say her atrocious lines.
I applaud Radcliffe for banking his Harry Potter money and making films like this, I just wish the script backed the actors up more here because this should've been really fun.
Recommended: No
Grade: D
Memorable Quote: "You'll just end up blowing your damn face off. Then you'll still be depressed, even more depressed probably because of your fucked up face.." - Glenjamin (Rhys Darby)