This week's theme from Wandering Through The Shelves is the one I dread every year because I do not watch enough TV shows that aren't in the English language. Since I don't re-use the same choices I have in past years (ie: all the anime I watch), please join me once again in reaching for the stars. And while we're here, let's make it GIRL WEEK too! All of my picks star women.

HEAR ME OUT, the majority of this show was in Yiddish so I'm counting it. It's a wonderful four part mini series on Netflix that I highly recommend. Shira Haas is fantastic in it.

This is in Japanese and is the sequel to the first anime I ever got into, Inuyasha. It's funny, I tend to write my TMP posts in advance, usually in a rough draft that I clean up the night or so before, and I had written "Maybe I'll like this better by the time this is ready to post." Spoiler alert, I don't. The more I watch, the more annoyed I get. The new characters are interesting, but the way the story is being told is awful.

3) Blackpink: Light Up The Sky

I know this is a documentary but since it aired on Netflix we can pretend its a TV documentary, right? RIGHT?! Yes, I know this is a major reach but I felt a bit like I was in the Josie in the Pussycats movie. You know that part where Josie puts on the cat ears, and the crowd mimics her? It was like I went in going "yes, I'm aware of Blackpink" to "Yes, now I love Blackpink." It was like I was hypnotized. These women were just not what I expected them to be and I just found them so endearing. Now I must buy all of their music. 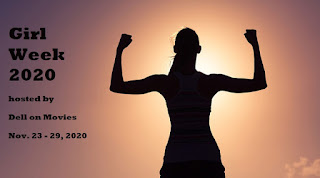