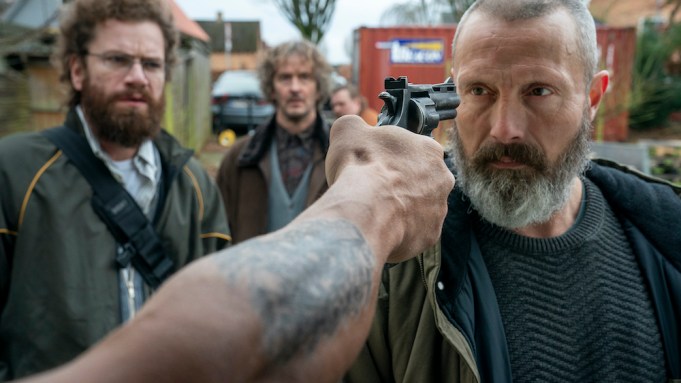 Markus (Mads Mikkelson) is a miltary man whose called back home when his wife is killed in a tragic train accident. Only, maybe it's not an accident at all. A Mathematician, Otto (Nikolaj Lie Kaas) switched seats with Markus' wife prior to the crash, and feels incredibly guilty, even more so when he sees Markus' daughter Mathilde (Andrea Heick Gadeberg) all alone at the hospital. He concludes that there are too many factors that lead to this not being an accident. Along with his colleagues Leinart (Lars Brygmaan) and Emmenthaler (Nicolas Bro) they bring their suspicions to Markus and what unfolds is a violent tale of revenge.

Mads Mikkelson is one of my favorite working actors right now so this has been on my watch list for a while. I know he has worked with director Anders Thomas Jensen several times, but this is the first time I've watched one of their films and now I need to search out the rest. I knew I'd like this, but I wasn't expecting to love it as much as I did.

This film has a lot of very dark and disturbing elements, but also a lot of awkward humor. It's truly about a band of broken people finding each other. Markus is the type to close off his feelings, Mathilde doesn't want to be like that, and his three new colleagues are all for being open. Even though they're all committing a crime together, watching them get to know each other and work through their issues was fascinating.

Of course Mikkelson was fantastic, but Nicolas Bro is another standout here. Emmenthaler has a bit of OCD and A LOT of opinions on screen resolution, I thought he was wonderful to watch.

And I'm counting this as a Christmas movie now because there's one scene in it that absolutely warmed my heart.

Memorable Quote: "Everyone is very excited to see the barn." - Leinart (Lars Brygmaan)