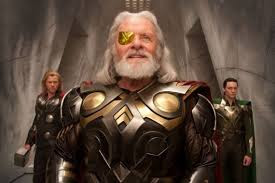 I'm going to be honest. I never liked reading Thor comics. He was never as interesting as Spiderman or Batman or Wolverine. Sure his hammer is pretty cool, but just because you have a neat weapon doesn't mean you are worthy. (Hello Aquaman)
I went into Thor thinking the trailers looked pretty cool, so perhaps I would enjoy it. After all, I never cared much for Ironman comics and I loved the movies. Thor (Chris Hemsworth) is cast out from his home planet of Asgard and banished to Earth. As he learns to adapt with humans, eveil Loki (Tom Hiddleson) seeks to destory them all. Thor must protect them.
The main problem Thor suffered from was that it was just plain boring. It didn't even that huge climatic fight scene that films such as Spiderman and Ironman had. It lacked the chemistry between the hero and villian that The Dark Knight had. Hell, even the romantic parts between Hemsworth and Natalie Portman felt forced. Poor Kat Dennings wasn't in the movie enough to save it with her quirkiness and shooting it in 3D was completely pointless. I felt like the filmmakers didn't even try. This movie was simply a stepping stone for the highly anticipated Avengers.
It didn't have it's own heart, it's own feet to stand on. I have a feeling Captain America will turn out the same way. It's just something to tide us over until the Avengers takes place next summer.
Thor wasn't horrible, it had it's entertaining moments. It just wasn't that good. Exactly the same way I feel about the comics. On the DC side, at least Green Lantern looks pretty awesome.
Recommended: No
Grade: C
Memorable Quote: "You're one of Stark's?" - Agent Coulson (Clark Gregg)