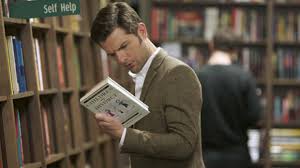 Carter (Adam Scott) has been caught up between his parent's (Richard Jenkins and Catherine O'Hara) rough relationship and subsequent divorce all his life. He finally found a middle ground as an adult. When his little brother's engagement happens, Carter has to find a way for them to be civil in the same room, he then learns he was actually a part of a study of the effects divorce has on children by Dr. Judith (Jane Lynch) and that really makes everything worse.

The premise of this was interesting. Technically, I'm an A.C.O.D. I joke about my parent's divorce being (and at times, still) a gigantic pain in the ass, but they are happy and it's all in good fun. I expected this film to feel a little similar, but how does a film with Scott, Jenkins, Lynch, and Amy Poehler end up so drastically unfunny?

'Average' is how I would describe this film. There's nothing special about it. The talent of its cast is wasted, the ending is beyond stupid and unnecessary, there were no laughs. At all. I didn't completely hate it while I was watching it, I just wanted it to be something more, and it never was.

Memorable Quote: "You must be Rick." - Michelle (Jessica Alba)