Indie Gems: Sound of My Voice 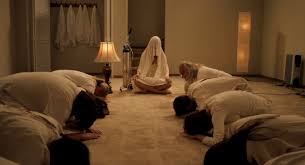 Peter (Christopher Denham) and his girlfriend Lorna (Nicole Vicius) are trying to make an undercover documentary on a suspicious cult who's leader,Maggie (Brit Marling) claims to be from the future.

Brit Marling's films have a bit of a trend, their endings are often left open for us to decide what happens next. This film is no exception. We're given hints here and there, but ever full on answers. In a way, it drives me crazy, because just when I think I have a solid theory on what Maggie is really all about, something else throws a wrench in it. But that frustration is what makes this film SO intriguing. I can't stop thinking about it days later.

Christopher Denham is a fascinating actor. He's someone who I hope to see in more films, he's absolutely captivating here. Especially in his scenes with Marling. I know i called this film frustrating, but I mean that in the best way possible. I can't recommend this film enough.

Memorable Quote: "This is not what we discussed." - Peter (Christopher Denham)
Indie Gems