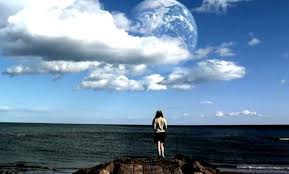 Rhoda (Brit Marling) had everything going for her. She just got accepted into MIT, and she's fascinated with outer space. One night, it is discovered that there is actually another Earth, while listening to a radio broadcast and staring into the sky, Rhoda causes a car accident that will change her life forever.

I first came across Brit Marling in The East, and I've been sold on her ever since. I've had this film and 'Sound of my Voice' in my Netflix queue for awhile, and I was happy to get this. The thing I liked most about this film was the discussions it provokes. Especially when we learn more about Earth 2. (I don't want to spoil it in the review, but feel free to talk about it in the comments)

Sure, a lot of people are annoyed by the "logic" behind this other Earth, and how close it is to Earth in the film. Honestly, it doesn't matter. It could almost be irrelevant in a way. This story is about Rhoda and her relationship with John, (William Mapother) the man who's life she ruined along with her own. I loved the ending because that final scene speaks volumes and really makes you wonder.

Memorable Quote: "I saw this image when I was a kid. The photograph of Jupiter taken by NASAs Voyager. Beautiful, but nothing special until shown in rapid succession. Suddenly Jupiter was alive, breathing. I was hypnotized."
Indie Gems