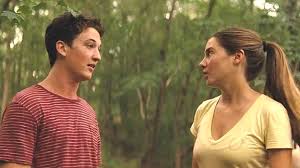 I feel like I'm getting too old to enjoy movies centered around teenagers and high school. I just don't have any interest in them anymore, but something about The Spectacular Now felt different, and after reading so many positive reviews, I decided to check it out.

Sutter (Miles Teller, with a voice that eerily sounds like Jonah Hill's) has just been dumped by his girlfriend. Cassidy (Brie Larson, who looks way to old to be a teenager) Even though he's only 18, he's well on his way to being a budding alcoholic. He passes out in the middle of a neighborhood and his classmate Aimee(Shailene Woodley) find him on her paper route. She's shy, they've never spoken, but Sutter decides he wants to help Aimee with her self esteem (all while trying to get Cassidy back) and they fall into a relationship.

Shailene Woodley is proving to be a hell of an actress. It's actually quite amazing to watch her, especially after seeing her on Secret Life, where the writing was to terrible it made EVERYONE on that show look bad. Unlike other films of the genre, this one felt just a bit more real. Sutter isn't a hot jock, and Aimee isn't a gawky nerd. No one wore makeup, and the only thing that felt extraordinary to me was how these underage kids kept ending up in bars.

The ending leaves you with a lot of questions, but I thought that was welcomed commentary. This film was quite interesting, despite me not really being able to relate to either character at this point in my life. It was a sweet little film, and a must watch for fans of Woodley.

Memorable Quote: "I'll stand up to my mom if you stand up to yours." - Aimee (Shailene Woodley)
Indie Gems