Indie Gems: Maps to the Stars 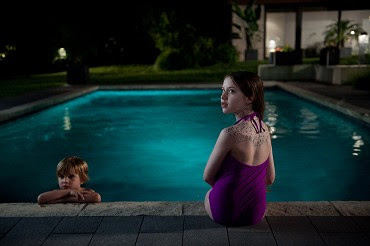 Remember when Julianne Moore got nominated for a Golden Globe in the comedy category for this film? Well sure, her character is amusing, but this film is not a comedy. Or a traditional satire for that matter, and that's okay.

Havana Segrand (Moore) is an actress determined to star in a remake of a film her late mother did. She thinks is has "Best Supporting Actress" written all over it. She also hallucinates her young mother (Sarah Gadon) who taunts her and calls her a liar. She see's a strange therapist (John Cusak) who happens to be the father of an insanely bratty child star, Benji. (Evan Bird) Then there's Agatha, (Mia Wasikowska) who has just arrived in Los Angeles for a very specific reason that she does not share at first.

Like I said before, it's not a traditional satire, though for some reason it's talked about as one. It never felt like Cronenberg was poking fun at this lifestyle to me. It was like he was showing how fucked up it really is. It also had interesting commentary on mental illness, which plagues several characters, if not all of them in this film.I loved it though, as I tend to love everything other than Cosmopolis from him. (Robert Pattinson is unfortunately in this too, but only ocassionally.)

Moore was great, even better than she was in Still Alice. Wasikowska and Bird were stands outs as well. Really, everyone fit in their parts perfectly. This movie is very weird, but in the best way possible.

Memorable Quote: "Whenever I said that, they went away." - Agatha (Mia Wasikowska)
Indie Gems